Here is a badly drawn plan of the entrance to the Sloe bar at Waterloo station: 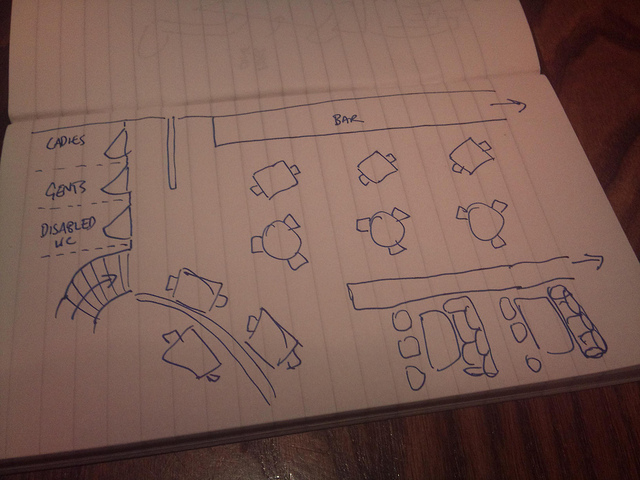 The Sloe bar is the one which is upstairs and has a balcony overlooking the main concourse. It used to be called something else, but I can’t remember what it was. It’s called Sloe now, I know that.

I occasionally pop in here on the way home from work, for a quick drink while I wait for my train. In fact, I tend to alternate between here, Bonapartes and the Wellesley. By visiting a different one of these pubs each time, with no specific pattern, I aim to delay the point where I become recognisable to the staff and they anticipate what drink I want based on what they perceive to be the drink I buy most often and then find myself locked into their preconceptions. This is my life.

Anyway, back to the diagram. That sort of curved bit with the lines on it and an arrow, that represents the staircase. This is how people access the bar, unless they use a ladder and climb up onto the balcony, although in all the time I have been going there, I have never seen this happen. People enter via the stairs. As the pub is situated in a railway station, it’s not really a place people plan to go. It’s not a destination in and of itself. Because of this, the clientele are mainly people either in small groups or on their own. On entering the pub, people naturally head straight for the bar to order. Sometimes part of the group breaks off to secure a table while one or two members of the group order drinks for everyone.

Essentially, what happens when people enter the bar is this: 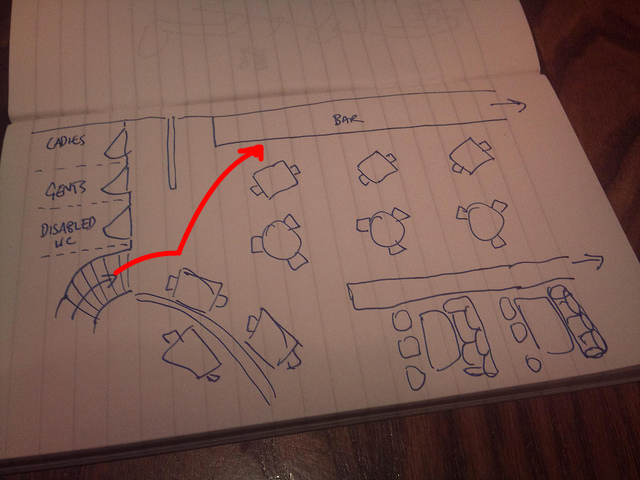 Sometimes people go straight to the toilets rather than to the bar, no doubt trying to save themselves the 30p admission charge to use the public toilets at the other end of the station: 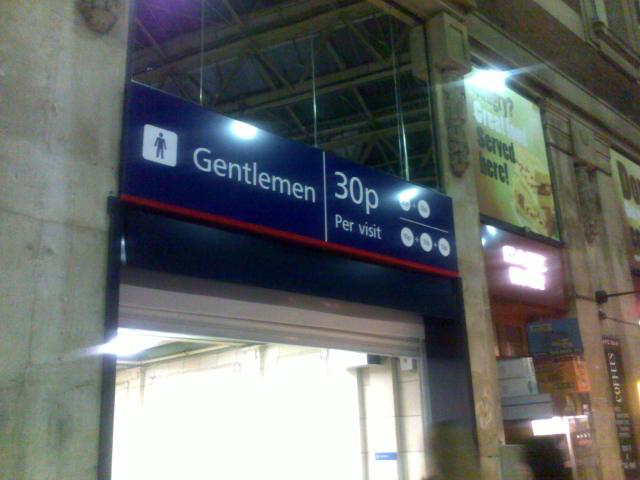 Please note, that is 30p per visit. The 30p admission fee does not buy you a one-day pass.

So, some people come up the stairs and go straight to the toilets: 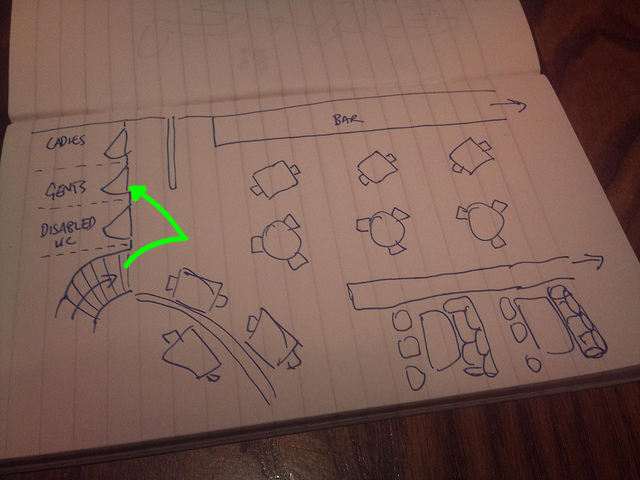 However, the people at Sloe are canny folk. And to discourage this, and to encourage people to buy a drink before they access the toilets (a cruel trick to play on those in desperation), they have installed a lock on the door which can only be opened by entering a code into the keypad. The code is currently 2589 (for the gents at least) although this code is changed periodically and I cannot be held responsible for any accidents caused by people entering this code only to be denied access. As a result, people who reach the toilet door, then realise they have to go to the bar to get the code and so this manoeuvre is quite common: 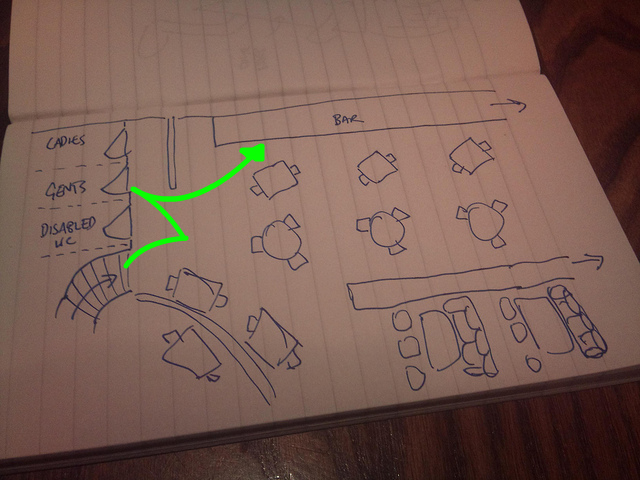 If we lay these two common patterns of entry over each other, we can see what generally happens when someone enters the bar: 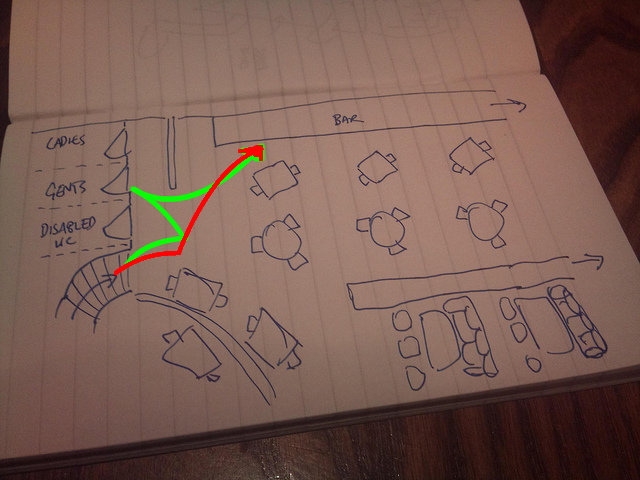 The two arrows meet at the same point, producing a “hot spot” at the far left of the bar. This is the most crowded section of the whole pub. This is the point where traffic is busiest. I’ve circled the area I’m referring to in yellow: 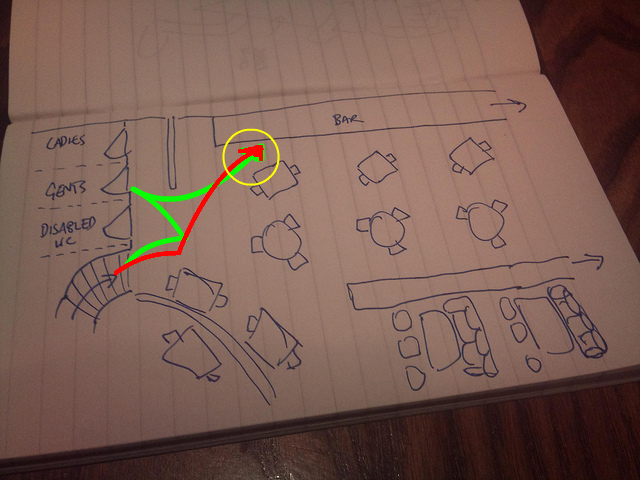 Now, given the increased amount of traffic which passes through the yellow circle, you might think that it would be somewhere to avoid if you were planning on spending an extended period of time in the pub. People would be constantly squeezing past you on their way to or from the bar. It’s inconvenient for them and annoying for you. It would make more sense to move to another part of the pub where it’s less crowded. However, it seems this is not the case. In fact, you will often find a group of people standing here, chatting: 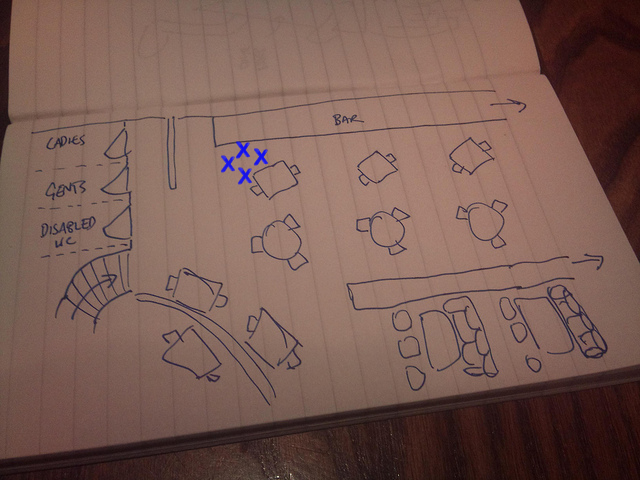 Not only are they standing in the hot spot, the specific point where there are more people than anywhere else in the pub trying to get served: 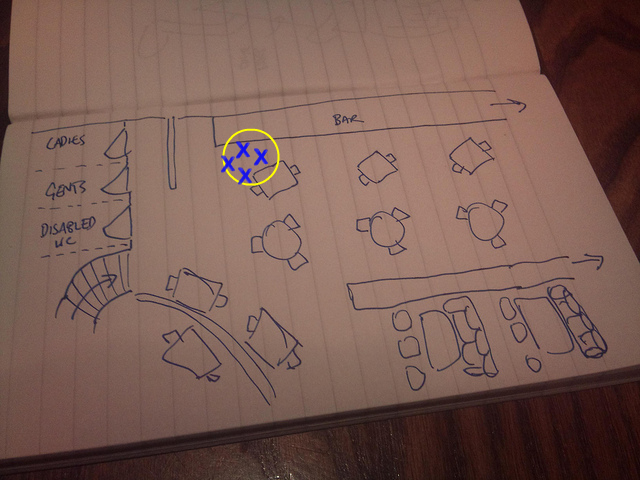 But as they stand in a group, facing inwards, they are often unaware that they are blocking entrance to the hot spot itself: 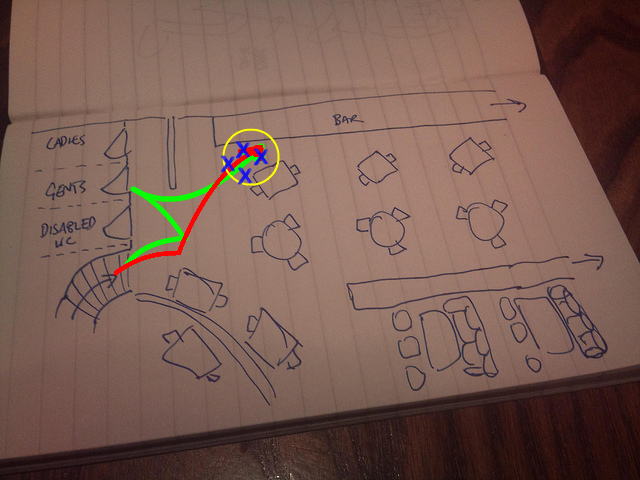 You may wonder why anyone would stand in such an awful position, needlessly inconveniencing everyone else entering the bar. The people who usually stand here tend to be predominantly male, in groups of four or five. Dressed in suits, usually in their thirties (often one of the group is a few years older, the boss taking his team out for drinks after work), they probably have fairly well paid jobs doing christ knows what. It’s easy to look at these people and assume they stand there because they simply don’t care about the people they inconvenience. It’s a good place for them to stand, near the bar, close to the toilets, they don’t care about anyone else. Even the fact that people squeeze past them could be considered a benefit; the constant stream of interruptions breaking up the potentially awkward post-work small talk and creating a non-stop source of action.

I think it’s more likely a kind of communication problem. Within their small group, they are insulated from the repeated message each person squeezing past is trying to say to them: “This is a bad place to stand, stand somewhere else”. They are only drawing information from their immediate situation, they aren’t looking at a badly drawn plan of the bar with some arrows and crosses on it. They probably don’t even realise that the rest of the pub is half empty. The only message they receive is “It’s a bit crowded tonight. Lively, buzzy. I like it”.

It’s similar to the problem of encouraging passengers to move down in a crowded train carriage. The people who need to move down are the people for whom the message “move down” is communicated to most ineffectually. The people in the centre of the carriage, squashed against each other, have this message constantly blasting at them. But the power of that message gets weaker as the crowding effect gets weaker. On the edge, you don’t feel squashed, so you don’t need to move down, so you don’t move down. People don’t move down the carriage, not because they are rude or uncaring, but because they are people.

This goes back to my spoons theory, I guess. We can huff and puff all we like and complain about how rude people are, but it might just be that they are completely unaware that they are causing anyone any inconvenience. This doesn’t in any way help to solve crowding problems in trains or pubs, or prevent spoons from going missing, but I’m reluctant to get angry at things people are unaware of doing, because I may well be just as guilty of committing these crimes myself. I’d have no way of knowing – that’s the whole point. So rather than getting yourself pointlessly worked up when these things happen, isn’t it better to just accept that sometimes people stand in the wrong place?