Last night, I had a conversation on Twitter about trifle.

Casper does NOT like Trifle ……..I am truly lost for words. He cant be my Son.

I’m not hugely keen on trifle either, and so I sympathise with Casper. It’s the sponge, you see. I don’t like the sponge.

If you’re not familiar with trifle, Wikipedia explains:

Trifle is a dessert dish made from thick (or often solidified) custard, fruit, sponge cake, fruit juice or gelatin, and whipped cream. These ingredients are usually arranged in layers with fruit and sponge on the bottom, and custard and cream on top.

There is also a photo to illustrate: 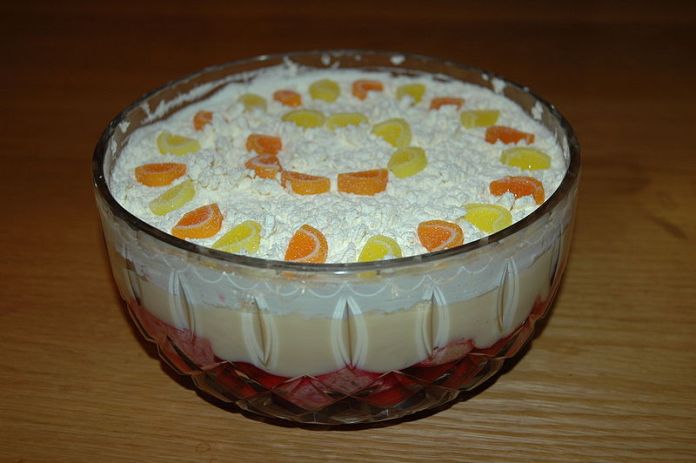 This trifle has been decorated with orange and lemon jelly slices, which can be used to add sweet, zesty flavour and a colourful sparkling finish to cakes, cupcakes, lemon tarts and gateaux. Or, in this case, a trifle.

Back to the sponge. In a traditional (although as Wikipedia explains, not the original) trifle recipe, sponge forms the base layer. This is then covered variously in layers of jelly, fruit, cream and custard. Sometimes the sponge is soaked in sherry. The consequence of soaking a sponge cake in sherry and covering it in jelly and custard is that the sponge goes soggy. I am not suggesting anything radical here. This is just a matter of physics. For some, this may be an attractive proposition – soggy sponge. But I don’t like it, in fact, I’d prefer trifle without sponge. I’m not saying my view on this matter is so strong that I refuse to eat trifle which does contain sponge, just that I make sure to eat the sponge first, so that the trifle is “safe”.

I have always eaten systematically. “Front loading” the early mouthfuls with whichever element I liked least, saving the ones I liked best for last. As a child, I would take this to extremes, eating all of one thing, then all of another, with favoured items untouched until the end (so, say, an English breakfast would be eaten in this order: all of the beans, all of the tomato, all of the egg, all of the mushrooms, all of the sausage, all of the bacon – these last two could be swapped round if it looked like a nice sausage). This systematic approach often irritated my sister, who adopted a different method (if eating sausage, mash and beans, she would chop the sausage up into little bits and stir the mash and the beans and sausage chunks up into a revolting goo, smothering it with ketchup). I gradually relaxed my food policy, or at least made it more subtle. I still “front load” my early mouthfuls, and the whole time as I eat, I continue to attempt to identify which item I shall leave until the very end. I also try to avoid contamination. Sacrificing a chip or two to create a dam, protecting the others from encroaching beans.

I attempted to explain my sponge worries, but the 140 character limit on Twitter made it difficult. I suggested a trifle without sponge, but this was mocked. I felt alienated and rejected. I don’t think I have ever felt so alone.

I thought of Twilight Zone: The Movie. I watched it years ago on video and haven’t seen it since, so don’t really remember too much of it. However, one story popped back into my head. A guy in a bar starts mouthing off, making racist comments to his friends. He leaves the bar and finds himself in Europe in the 1940s. SS officers appear and start chasing him, having identified him as Jewish. Then he’s transported to the deep south of America, where members of the Ku Klux Klan see him as black and form a lynch mob. Then he’s in Vietnam and attacked by US soldiers. This racist man finds himself in a variety of situations where he is the victim of the prejudice he bitterly directs at others.

At that moment, rejected on Twitter because of my extreme views about trifle, I realised I was the sponge.