As I mentioned yesterday, I emailed the No2AV campaign about this advert which appeared in the Birmingham Mail earlier this week: 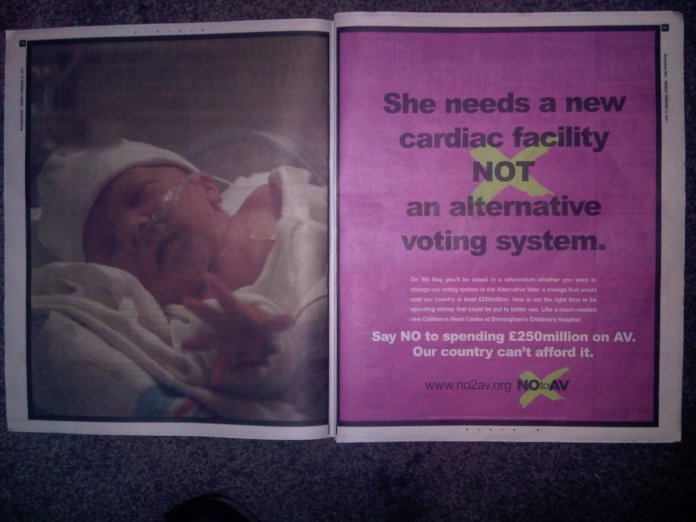 I was concerned about the baby and whether, by voting “Yes” in May, I was condemming this baby to death. Unfortunately, in the twenty four hours since I emailed No2AV, I haven’t had any kind of response.

If you do a Google image search for “premature baby” this image comes up on the fourth page of results:

It sort of looks like the same baby. As Joshua Goodwin pointed out in the comments to yesterday’s post, if you do a TinEye search on the original image, it comes up with six other instances of the same image being used elsewhere.

According to clause 3.6 of the Thinkstock Image Pack License Agreement:

If any Licensed Material featuring a model or property is used in connection with a subject that would be unflattering or unduly controversial to a reasonable person, Licensee must accompany each such use with a statement that indicates that: (i) the Licensed Material is being used for illustrative purposes only; and (ii) any person depicted in the Licensed Material, if any, is a model

Fortunately, there’s nothing unduly controversial about using an image of a premature baby in an advert campaigning against a change to the electoral system, so there’s no need to worry. The other bit of good news, is that you can vote “Yes” in May without feeling responsible for killing the baby. The same baby appeared in this story which dates back to Tuesday 12th August 2008 which means she’s almost certainly better by now. Well, either better or already dead. Either way, your vote won’t affect that baby in the slightest. She, or possibly he, almost certainly doesn’t live in Birmingham anyway and whether or not we vote “yes” or “no”, and whether or not Birmingham Children’s Hospital gets a new Children’s Heart Centre makes no difference to her, or possibly him. Of course, those of you tempted to vote “yes” simply to get the vicarious thrill of contributing to the death of a baby will no doubt be disappointed, but here is a list of Nestlé brands by way of an apology. Go down the shops and have fun.