I see this poster every day when I’m waiting for my train: 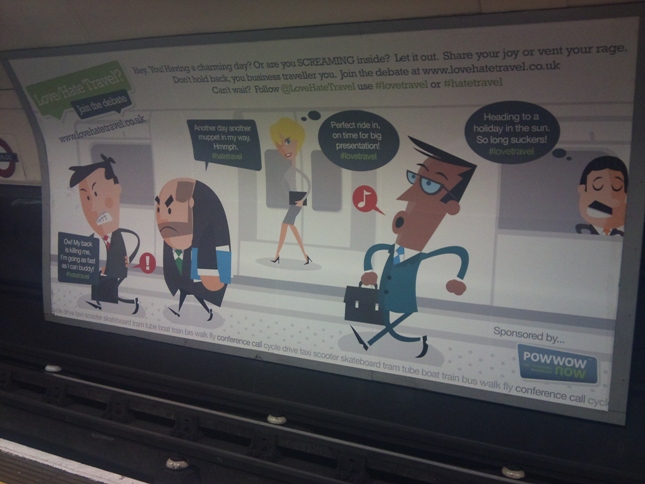 It’s part of a “Love/Hate Travel” campaign sponsored by Powwownow. The idea is that people post messages on Twitter about their travel experiences using either the #lovetravel or the #hatetravel hashtags depending on whether the experience is positive or negative. The bit of text at the top of the poster explains:

Hey, You! Having a charming day? Or are you SCREAMING inside? Let it out. Share your joy or vent your rage. Don’t hold back, you business traveller you. Join the debate at http://www.lovehatetravel.co.uk
Can’t wait? Follow @LoveHateTravel use #lovetravel or #hatetravel

So actually, it’s aimed at business travellers, not just anyone. But I see that poster on my way to work, so does that count as “business travel”? Along the bottom of the poster, they list various different types of transport:

I can’t really imagine many business travellers using a skateboard to get to a meeting. Unless it’s Tony Hawk (the American skateboarder, not the comedian, writer, musician and philanthropist Tony Hawks).

“Conference call” isn’t really a type of transport either, although Powwownow do provide customers with “low-cost conference calling facilities with the ethos of no booking, no billing, no fuss”. However clearly, this is not a Powwownow advert. This is a campaign “sponsored” by Powwownow. I’m not sure what that means. Is this poster “sponsored” by McCain’s Rustic Oven Chips? I suspect what it means is they’ve created a couple of hashtags on Twitter and are claiming to have created some sort of debate, and so are contributing to the public sphere. The fact that it’s a debate which will provide them with loads of quotes from people saying how much they hate travel and if only they could do all their meetings by conference call instead is just a fortunate coincidence. 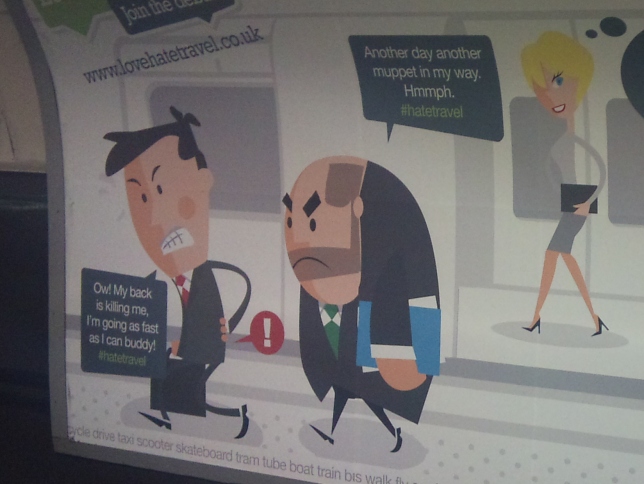 Ow! My back is killing me, I’m going as fast as I can, buddy! #hatetravel

This poor man hates travel because his back is so painful it appears to producing sound.

Another day, another muppet in my way. Hmmph. #hatetravel

That’s a bit unfair, just listen to that other guy’s back. In fact, you’d think that second guy would be a bit more sympathetic to someone suffering from back pain considering the fact that his spine appears to go all the way up and round to the top of his head. In fact, maybe that’s why he’s not interested in the noises being emitted by the back of the man in front of him. He’s spent his whole life experiencing absurd back problems, he doesn’t care about anyone else’s noisy back. God only knows what noise his back makes. 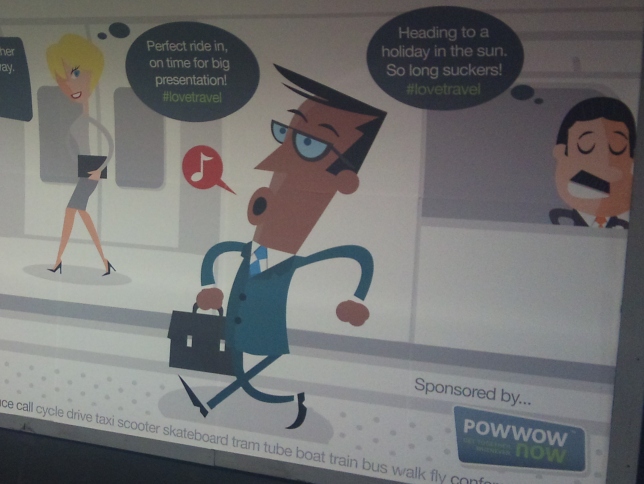 I’m assuming the man whistling is just whistling because he’s happy that he has a silent back and he’s not whistling at the smug, sexy woman on her way to her presentation.

Heading to a holiday in the sun. So long, suckers! #lovetravel

Hang on, he’s going on holiday! He’s not even a business traveller.