You may remember that last year there was an election. There was quite a lot of coverage in the press at the time. In case you missed the result (**SPOILER ALERT**) the Conservative party formed a coalition with the Liberal Democrats.

Since May, and without any mandate whatsoever, the coalition government have embarked upon a terrifying programme of spending cuts, justifying such action with the disingenuous claim that it was the previous government’s public spending record which has resulted in the country’s current economic problems. Against such spending cuts, the TUC organised a “March For The Alternative” this weekend.

I went to central London on Saturday and noticed it was particularly busy. There were helicopters flying overhead and a heavy police presence. It was the day of the Boat Race, but even so, I was surprised by the amount of people:

There seems to be loads of people in central London. I hope they all turn up tomorrow for the march against the cuts.

The route was posted online: 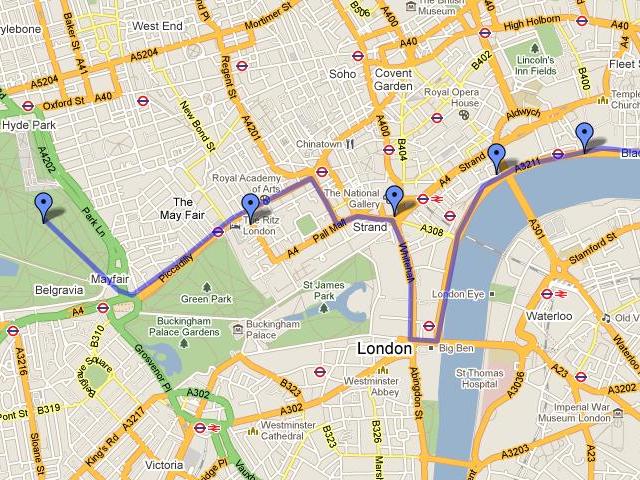 We’d start in Victoria Embankment, then move along the Thames to Westminster Bridge, then up to Trafalgar Square, round to Piccadilly Circus and finally, along Piccadilly to Hyde Park.

At 12noon on Sunday, I arrived at the starting point of the march. I was expecting a huge crowd, but then, when I got there, I couldn’t see anyone else. I thought maybe I’d gone to the wrong place, but I realised that this was definitely where the march was supposed to start from: 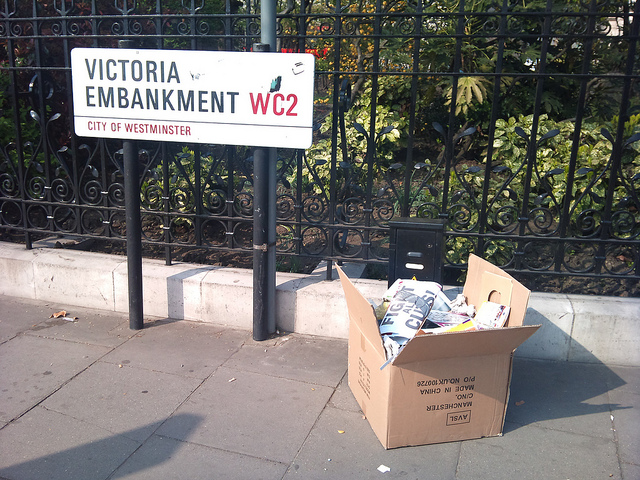 Actually, I had to take that photo twice because this happened the first time: 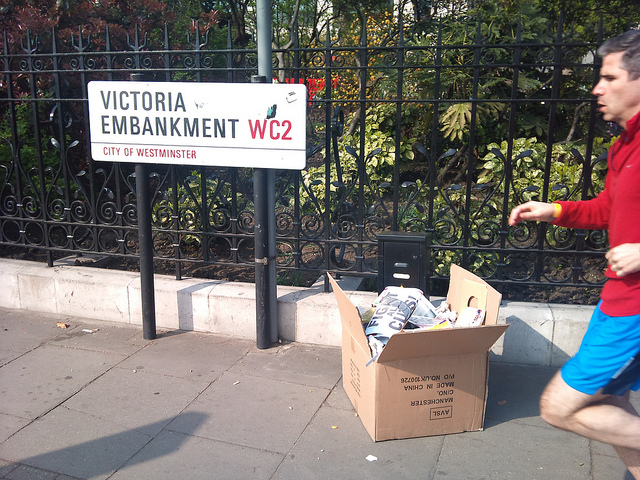 I was fairly sure I was in the right place. I could see signs that a protest of some kind had recently taken place: 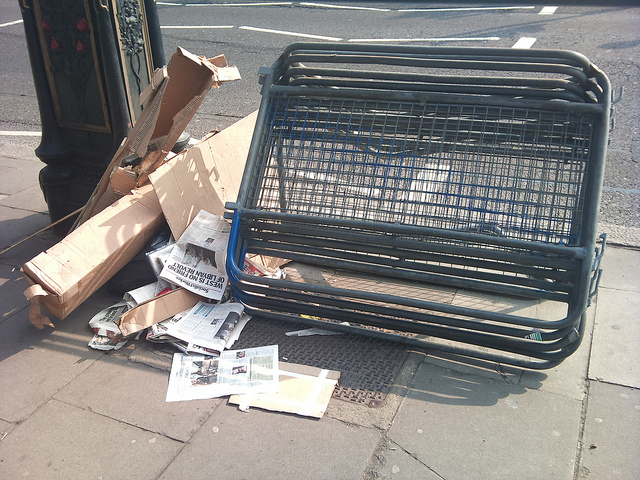 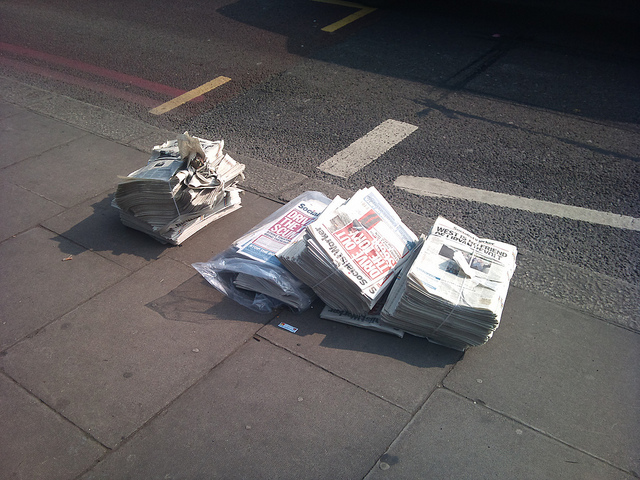 Where were all the people? I thought they were expecting up to five hundred thousand people, but there was no-one. The odd tourist, a few joggers, but no-one else. Suddenly I realised I had made a terrible mistake. How could I have overlooked this detail? It was such a simple thing. Of course there weren’t any other protesters around – I’d forgotten that the clocks had gone forward the previous night. I was an hour late!

I walk quite quickly, so I thought maybe I’d be able to catch up with the others. I started along the route. I could see a few marks left by earlier protesters: 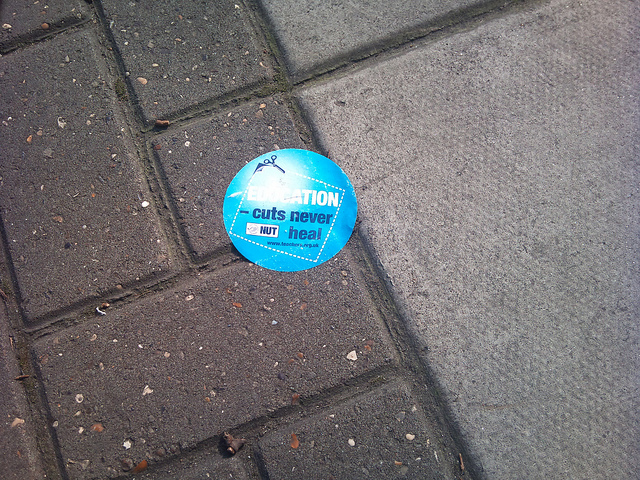 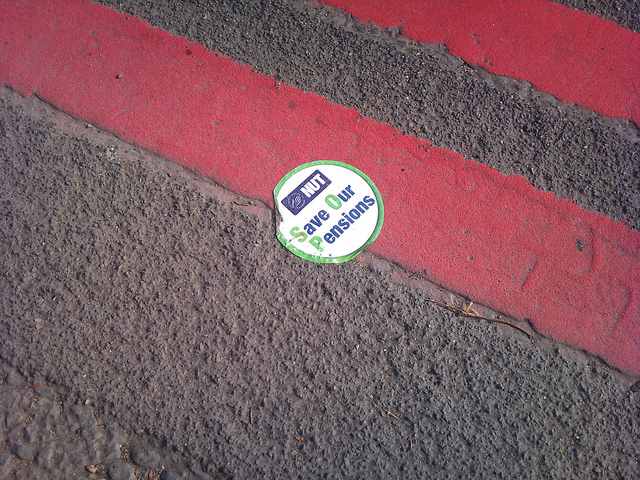 I saw a group up ahead and thought maybe it was the other people on the march, but then I realised it was a charity handing out soup to people in the street. As it was quite sunny, I didn’t really fancy any soup, so I carried on my way. I got to Hungerford Bridge and saw a sign warning people what they should do if they are stopped by police: 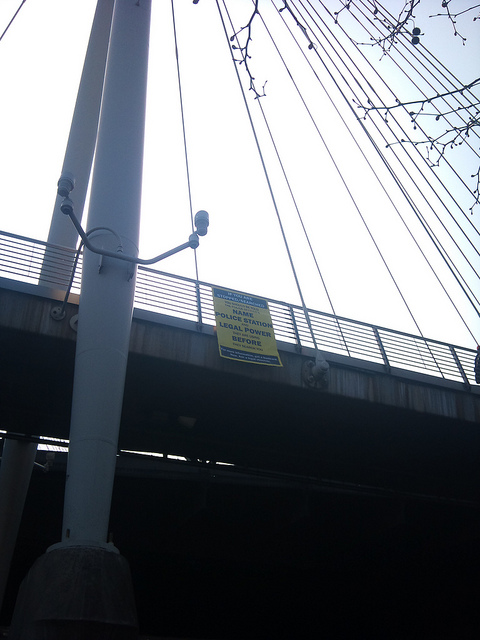 YOU SHOULD BE TOLD
THE POLICE OFFICER’S

For more information, get a bustcard.
Now. Ask a legal advisor.

I’d been walking for about ten, maybe fifteen, minutes by this point. I know I should have gone before I’d started the march, but I kind of needed the toilet, and despite the fact I knew I had to catch up with the other protesters, I went for a pint on the Tattershall Castle. The Tattershall Castle is sort of like a pub, but if you can imagine it’s like a pub which floats on the river. A boat. Basically, it’s a boat. It was such a lovely sunny day, and I really did need the toilet. I couldn’t resist. I went down the walkway thing onto the top deck and ordered a Bulmers from the bar. Really, I should have gone to the toilet before ordering the drink, but I was heady with confusion. I drank the cider quickly and then went downstairs to use the toilets. There was another man using the urinals, but he didn’t appear to be part of the march. Certainly, he didn’t respond well to my cry of “Solidarity!” as I entered the toilets.

I left the Tattershall Castle and continued along the route, reaching Westminster Bridge. Here, I thought that maybe I’d been able to catch up with the others, but as I got closer, I realised that the crowds of people were just tourists. They were standing taking photos of Big Ben. I didn’t want to feel left out, so I took a photo of Big Ben too: 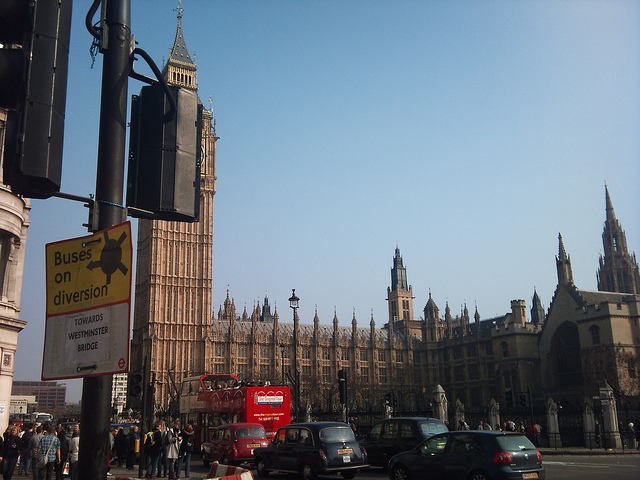 As I turned into Whitehall, I noticed that the button for one of the traffic lights was slightly damaged: 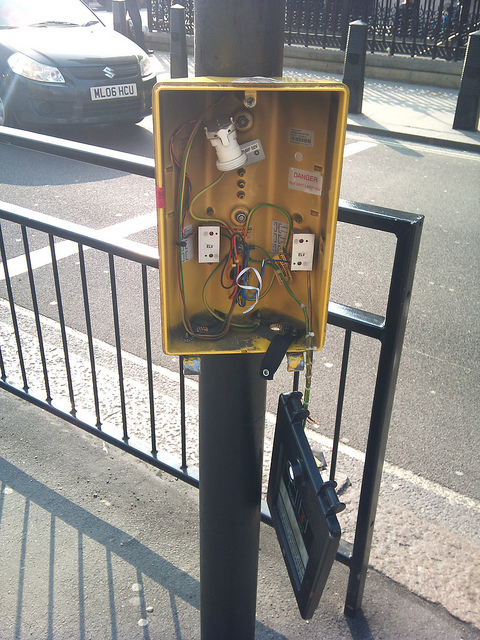 As the whole point of the day was the idea of getting involved and not accepting the status quo, I decided to make a stand: 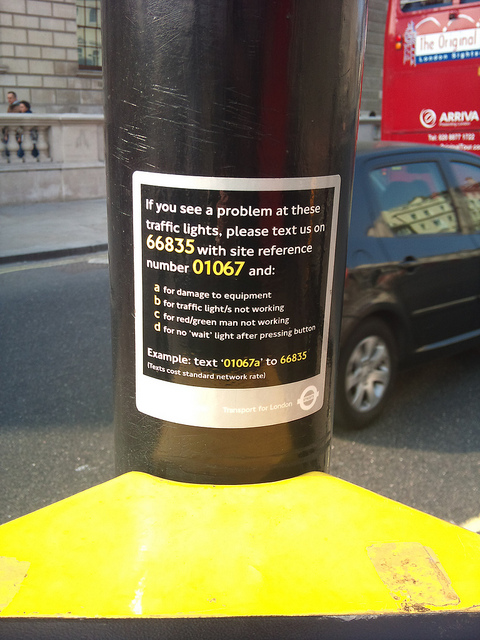 Thank you for your text message. Transport for London is investigating the issue.

I couldn’t tell how the traffic light button had been broken and hoped it wasn’t a sign that the the protest had turned violent. I didn’t want to walk into a potentially explosive atmosphere and certainly didn’t want to be “kettled” and began to wish I’d paid more attention to the sign hanging from Hungerford Bridge.

I continued up Whitehall. As I passed Downing Street, I flicked the V’s and muttered “UP YOURS, TONY BLIAR” although I said this quietly because there were policemen with machine guns and I didn’t want to get shot in the head.

I saw a piece of graffiti which appeared to reflect the mood of the protest: 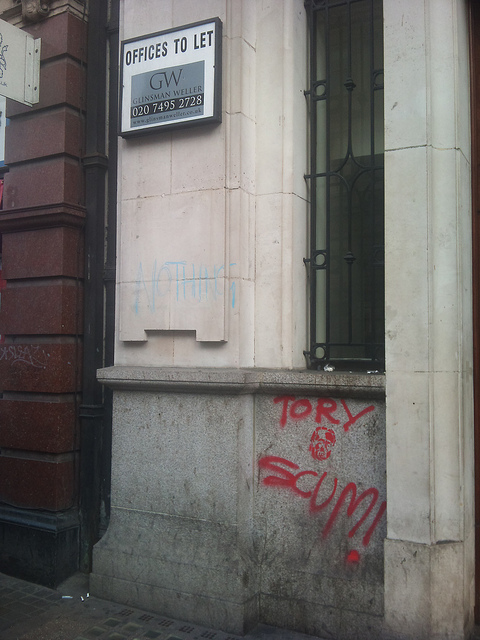 The choice of target seemed slightly odd as it appeared to be an empty office available to let. Although I later realised that Glinsman Weller, the company advertising the property, had been appointed by the Liberal Democrats to rent out their 7,000 square foot HQ at 4 Cowley Street, for £31.72 per square foot and so this empty building was actually a legitimate political target.

I got to Trafalgar Square. There was a sign announcing a plan to occupy Oxford Street: 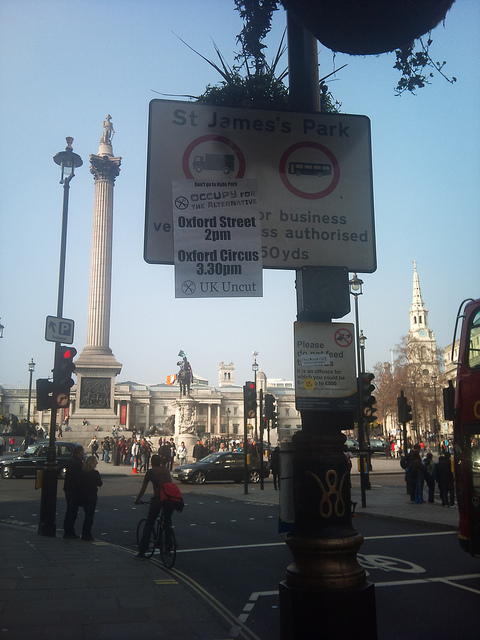 You might notice in the background that someone has stuck a flag and a tabard on one of the statues in Trafalgar Square. You see, it’s not all about angry protesting. You can have a bit of fun too. Dressing up a statue. We’ve all wanted to do it.

At Piccadilly Circus, there were lots of people, but again, they all seemed to be tourists. They were taking photos of Eros, so I took one too: 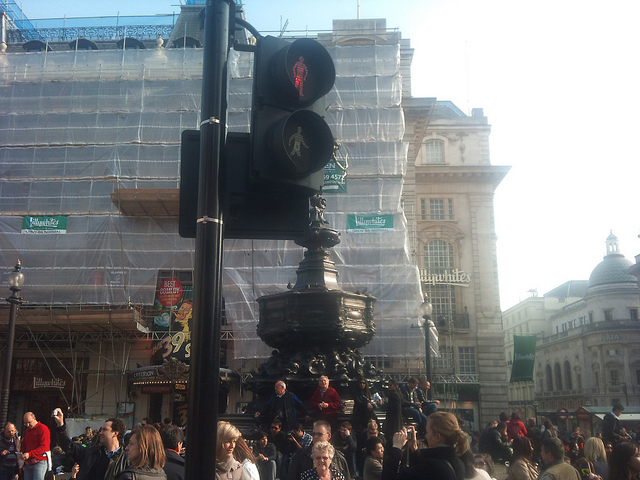 I started along Piccadilly, and began to realise at this point that I probably wouldn’t be able to catch up with the other protesters. I’d just have to meet up with everyone at the end of the march in Hyde Park. I was feeling a little bit tired and wanted to rest my feet, so thought I’d have a quick pint in a pub along the way. Unfortunately, I realised I didn’t have any cash on me. I went to the cash machine, but it appeared to be out of order: 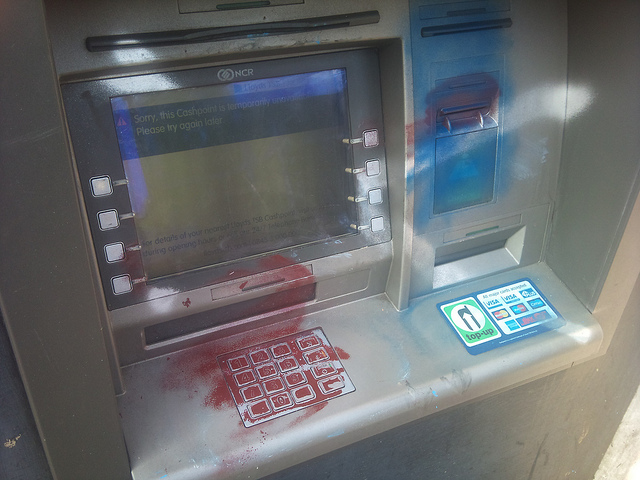 I tried the next one, but that one seemed to be suffering from a technical fault as well: 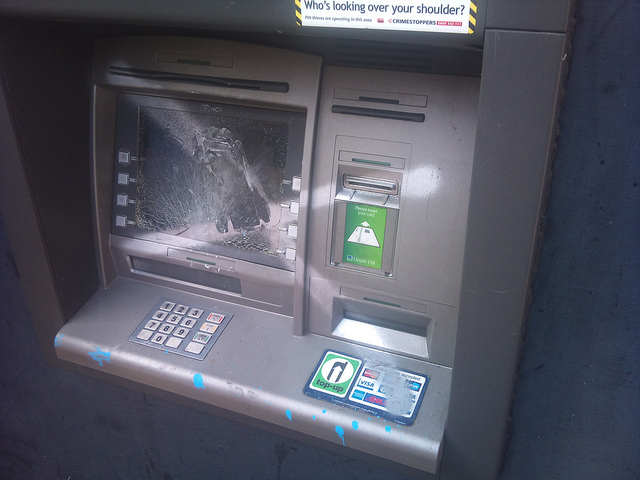 By the time I reached the third cash machine, I realised that possibly my earlier fears had been confirmed and that the protests might have turned nasty: 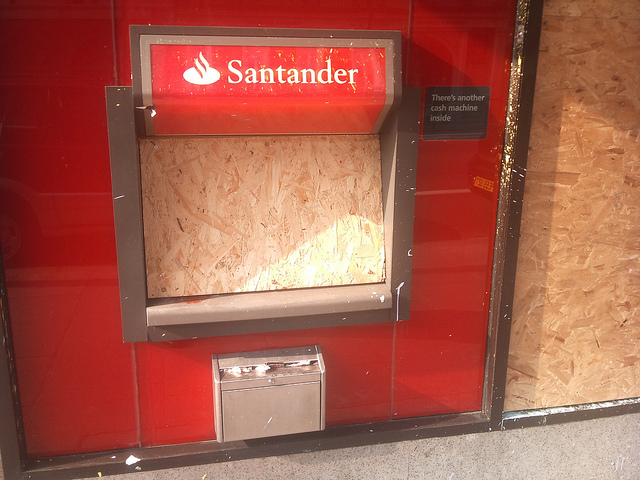 The banks, of course, were an obvious target and it wasn’t surprising that people would take their anger out on them. I saw this scrawled on a sign outside RBS: 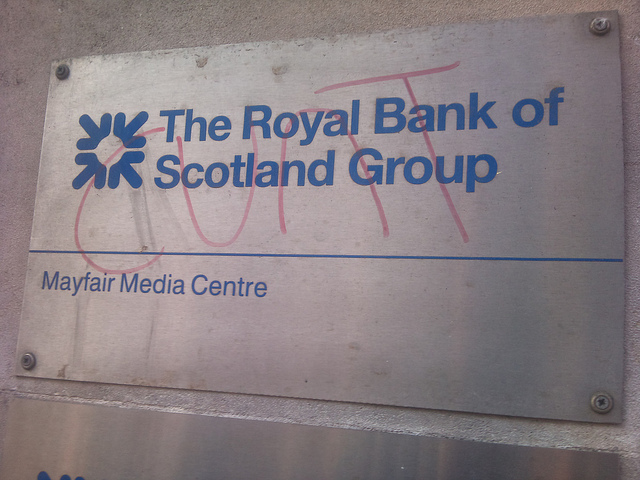 It’s not very easy to read, because it’s just written in red marker pen, but what they’ve written over the RBS sign is the word “CUNT”.

As an emblem of privilege, and as it is right near the end of the march route, it’s not that surprising that the Ritz Hotel was also targeted, although, they used a cunning defence method. They created a false façade, convincing attackers that they were targeting the historic hotel when actually, it was just a screen held in place in front of the building, a sort of trompe l’oeil: 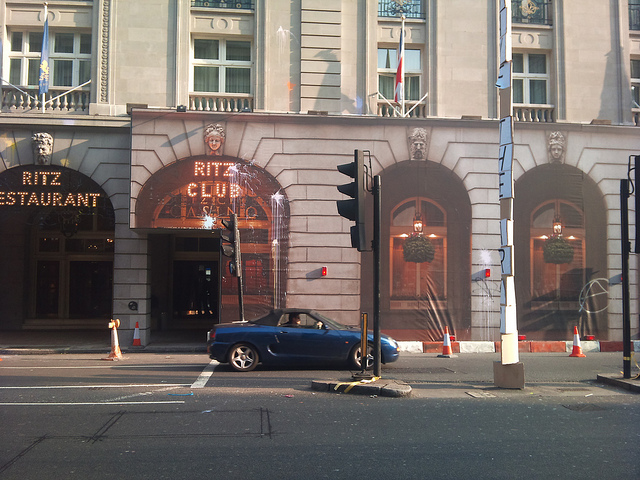 Eventually, I reached Hyde Park, but even then, where I expected to see hundreds of thousands of people gathered together in protest, I just saw a few dozen playing football in small groups: 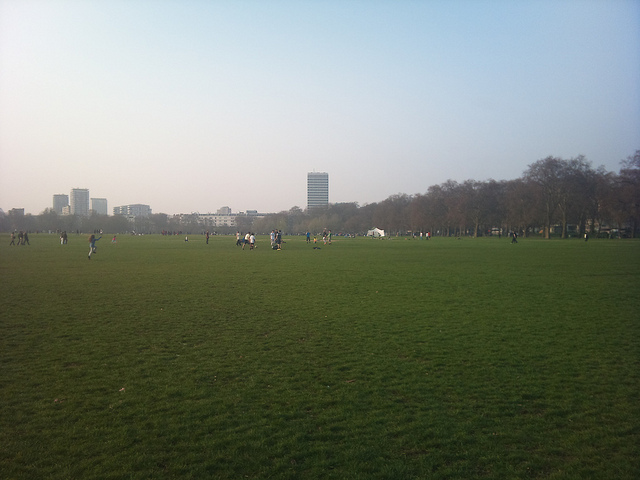 In the distance, I could see a gathering of people and I thought that maybe, at last, I’d found my fellow protesters. But as I approached, I was slightly disappointed to see they were packing up already: 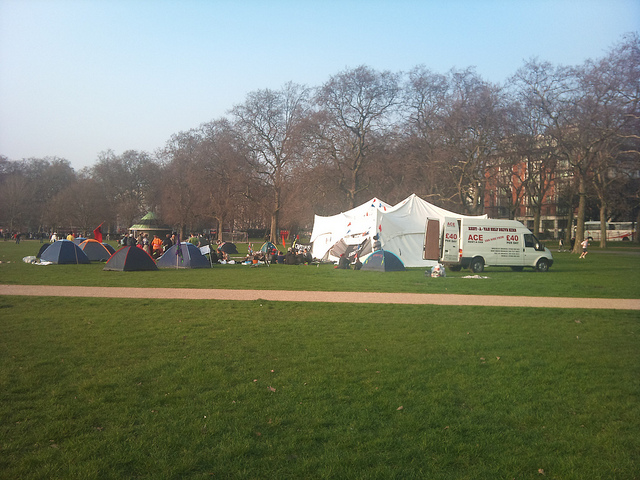 To be honest, I’m quite disappointed. I feel like my whole Sunday has been wasted.