I took some photos: 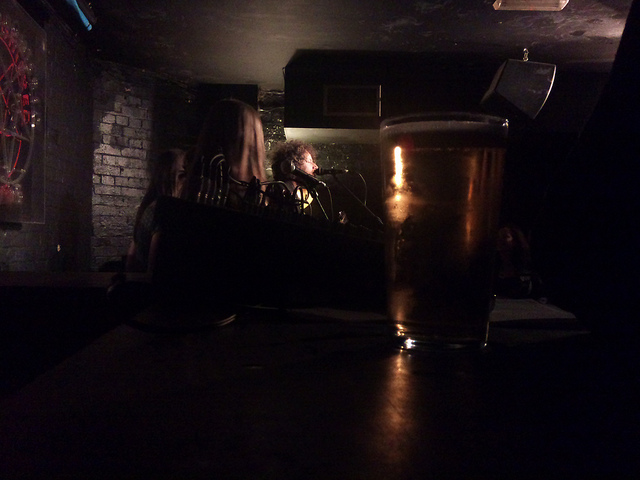 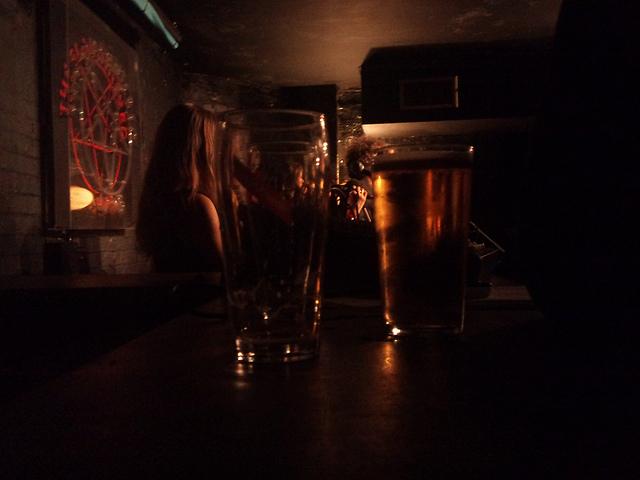 I like the second photo best, it has a nice warm glow.

The gig was in the basement of a pub. The upstairs, or rather ground floor, of the pub was a pub. Before going downstairs, I bought a drink from the bar.

Over the years, I have somehow got into the habit of saying “Cheers, thanks” when I am handed my change after making a purchase. I’m not sure where this phrase came from, or how it entered my vocabulary, but it has been there for quite a while. I don’t like the phrase. It’s tautologous. Why “cheers, thanks”? Why not just “cheers” or just “thanks”? Think of how much energy I have wasted over the years with this pointless repetition of gratitude. Sometimes I try to justify it. The “cheers” could be for the drink or other item I have bought, the “thanks” for giving me my change. Although this is just post-rationalisation and isn’t even true. I say it even when paying with the correct money. Perhaps the “thanks” then could be a sign of gratitude for the service I have received. I remain unconvinced.

Last night, I decided to make a change. You only get one shot at life, and if you’re not happy with something, you have to take control and change it. Life isn’t a rehearsal.

I bought a drink. A pint of Red Stripe. The barmaid poured my pint. I handed over a five pound note. She handed me my change. I went for it. “Thank you”, I said.

It’s still two syllables. It’s not more efficient. But at least it’s not pointlessly repetitive. I’d planned what I was going to say as she was pouring my drink. “I’m going to do it, I’m going to do it” I thought. “Thank you.”

It was a disaster.

“Thank you”, the words seemed alien in my mouth. They came out all wrong. “Thank you.” I sounded like a lunatic. The “thank” was high-pitched and unsure of itself, almost falling over as it came tumbling out of my life.1 The “you” was over-long. It was as if I thought that stretching out the “you” would hide the fact that the “thank” had been so bad, when in reality, it just exacerbated the problem and turned the whole phrase into a stupid, idiotic mess. The words had no meaning, they were just sounds. The wrong sounds.

I’m never doing it again. “Cheers, thanks” is the phrase I’m sticking with.

——
NOTES
1What I actually meant to write here was this:

The “thank” was high-pitched and unsure of itself, almost falling over as it came tumbling out of my mouth.

I have no idea why or how I typed “life” instead of “mouth”, but possibly the phrase I typed originally is better. “The words came tumbling out of my life”. An evocative phrase, but I’m not quite sure what it actually evokes.