After my ordeal, I was in need of a drink. The Sloe bar is now closed, as part of Network Rail’s redevelopment plans for Waterloo station which will provide seventeen new retailing opportunities as part of a 20,000 sq ft new balcony floor which will run along one side of the station.

So instead I went to Bonaparte’s. Bonaparte’s is very slightly nicer than the Wellesley, the other alternative now that the Sloe bar is no more. I bought a pint of Amstel (£3.60, the price recently went up by 10p). As I sat down, I noticed something on the floor by one of the other tables:

That small dot on the black tiles to the right of the chair is a pound coin. It’s hard to see in that photo, so I have zoomed in: It’s still not very easy to see, so I have labelled it: 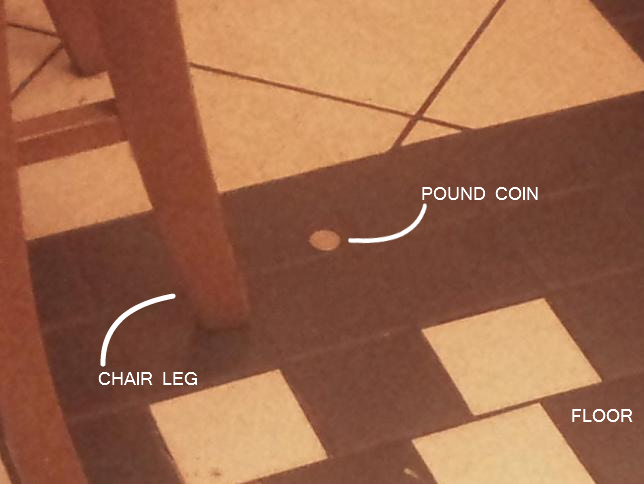 A pound coin! Just lying on the floor! I decided that, even though the pound coin did not belong to me, I would take it anyway. I would apply the rule known as “finders, keepers”:

I was unconcerned about the legal or ethical implications of taking this pound coin. I would take it and to hell with the consequences. However, I didn’t want to get up and walk over to the pound coin and pick it up. That would be too obvious. Someone might see what I was planning and get in before me. I decided to play the long game. I would wait it out. Finish my drink and then, as I was leaving, bend down and pick up the coin.

Of course, there are risks with this strategy. The longer I waited, the more chance there was that someone else might see the coin and pick it up. But I am fearless. I sat there, acting as if I was just a normal man having a quiet pint. No indication that behind those calm, expressionless eyes, there was a mind carefully plotting the crime of the century.

A man came and sat at a table near the pound coin. My heart was racing, he was bound to steal the coin I thought. I cursed my arrogance. That pound could have been mine! I tried to remain calm. Maybe he hadn’t seen the coin. Who was I trying to kid? The pub was almost empty. He could have sat anywhere. He deliberately sat near the coin so he could claim it himself.

I returned to my pint, feeling despondent. Who was this criminal mastermind who had thwarted my plans? I watched him carefully as he sat there. At one point, he got up. “This is it”, I thought. “He’s making his move”. But wasn’t it too soon? He walked past the coin and approached a woman sitting on her own. He said something to her, she shook her head and he walked back towards his table. I have no idea what he said, perhaps it was just a simple question – asking to pinch a cigarette – or maybe it was an invitation to dinner. Whatever it was, the exchange took only a couple of seconds. What a brilliant tactic. So simple. The exchange with the woman was just a ruse. He had no interest in her. It was just an excuse to get up and then “notice” the coin on the return journey. I almost applauded.

But then he didn’t pick up the coin. He went back to his seat. I was confused. He sneezed into his hands, then rubbed his hands together, then rubbed his hands on his jeans. I began to suspect that maybe I’d given him more credit than he deserved. Maybe he wasn’t a genius after all. I looked at him more closely. He looked scruffy. At first, I thought this was deliberate, so he wouldn’t draw unnecessary attention to himself, but I began to wonder if maybe, he was just a bit scruffy.

He finished his drink. He got up and, walking past the coin one final time, he left.

A few seconds later, I finished my drink too. I got up, took a few steps and casually bent down.

The coin was mine.