Ever since last January (and in fact for some time before that) I have been troubled by the frequency of the “seek assistance” message I received when travelling through the ticket barriers on the Underground.

Initially, I was concerned that it was my technique which was triggering the messages, but they became so frequent that I became convinced that the card was at fault.

When I originally wrote about my Oyster woe, some people commented that there was in fact no need to remove the card from my wallet when passing through the gate. This should have been a clue. My Oyster was already so ineffectual that it necessitated wallet removal. In recent weeks, I was forced not only to remove the card from my wallet, but even the yellow plastic Oyster card holder (the result of a sponsorship deal between Transport For London and Ikea) was too much.

Indeed, things got so bad that even pressing the naked Oyster card directly onto the reader would still bring up the messages. Or worse – on several occasions, the reader would completely ignore my card and I would only be allowed to continue my journey through special pleading with the machine, overwhelming its cold circuitry with positive thinking.

Last night, my Oyster finally died. I had just about managed to get through the gate at Tottenham Court Road (a mistake as it happens, I’d forgotten there was no Northern Line interchange so had to get the Central Line one stop to Oxford Circus to then get the Bakerloo Line to Waterloo).

At Waterloo, trying to leave the Underground station, the reader once again ignored my Oyster. Aware that this would take a long period of negotiation with the machine, I stepped back to allow the crowds through, jealous of their fully-functioning Oyster cards. They didn’t know how lucky they were, the ungrateful bastards.

Once the crowds had passed, I tried again. Nothing. Usually the reader would ignore me, then eventually offer an error message or two before finally relenting and letting me through. Not this time. I was worried that I’d never get out. I’d have to start a new life, within the London Underground network. Sometimes I would take the District Line or the Piccadilly Line somewhere so I could emerge above ground and feel the gentle breeze on my skin, before returning to my underground lair. I would befriend the mice and become their king.

Eventually, I went to the passenger information window. I explained my problem – that my Oyster card no longer worked and I was trapped underground and that if he didn’t help me, I would be forced to mate with my mouse bride to produce an heir to the throne I would build out of old copies of Metro.

He swiped my Oyster card against the reader. “It doesn’t work” he said, helpfully. I filled out a form and he gave me a new Oyster card. “Thank you,” I said. I went to the barrier. I was nervous. Would it work? Would I finally be free? It worked! I sprinted through the barrier and up the escalator. I kissed strangers on the main station concourse. I was free! I was finally free!

I was overjoyed. Except, I have one nagging regret. Look at the stupid bloody Oyster card he gave me: 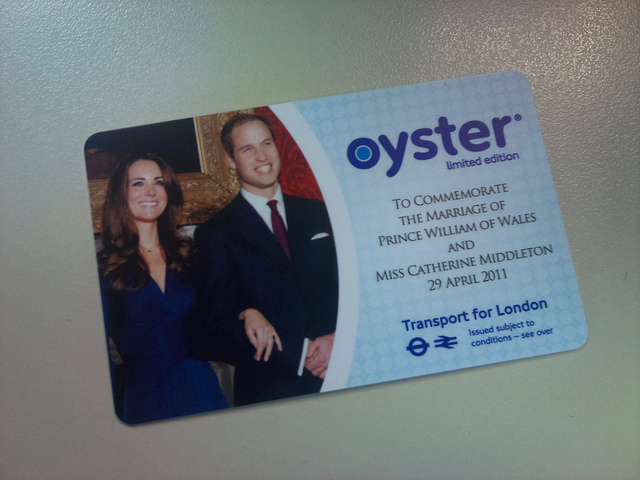 It’s not too late just yet, Kate. There’s still time. You could ditch William and marry me and we could live underground, surrounded by our loyal mouse subjects.