On Saturday afternoon, I went in to central London as I am perfectly entitled to do.

I went to the London Graphic Centre and bought a desk tidy in the shape of a large pencil sharpener:

After that, I went to the Cross Keys pub on Endell Street, where I was very impressed by the selection of switches behind the bar: 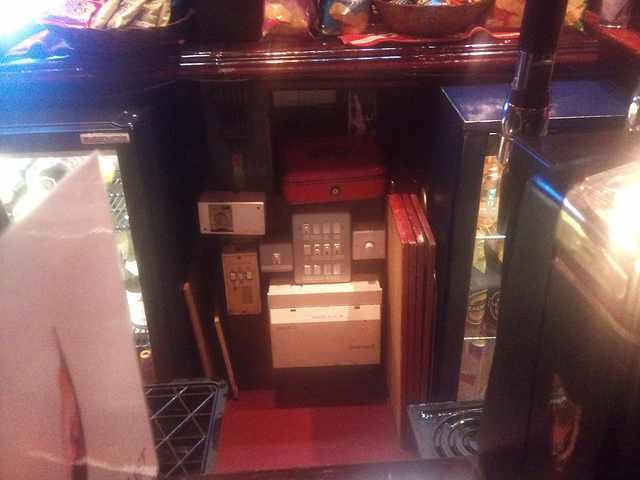 From there, I walked to Waterloo station to get the train home. I walked up the steps to the station and entered through the “Victory Arch” entrance (entrance 5 on this map). As I entered the station, a group of men started chanting “YOU FAGGOT! YOU FAGGOT!” at me. I stopped. I walked over to them.

“Sorry, what?” I said.
“What’s your problem?” replied the leader of the group.
“I just want to know what it was you were shouting at me. It was ‘You faggot’, wasn’t it? Why did you shout that at me?”
“It wasn’t ‘You faggot’, it was ‘You maggot'” lied a girl who was with the group.
“No, it wasn’t ‘You maggot’, it was ‘You faggot’. You chanted ‘You faggot’ at me”
“Listen mate, fuck off” said the group leader, ignoring the girl’s disingenuous and flawed attempt to resolve the tension, although quite why she thought I’d consider it acceptable for a group of people to chant “You maggot” at me is a mystery.
“No, I won’t fuck off. You called me a ‘faggot’. Why do you think that’s OK to shout at someone?”

By this point, the group leader was becoming visibly angry. He pushed me. He told me to fuck off. I refused to fuck off. He pushed me again. I asked him to stop pushing me. He was standing so close to me that I could smell his breath. His breath stank. I’m not sure quite how to describe the stink. It would be glib to describe it simply as the stench of hatred and ignorance. It was more than that. There was a horrible warmth to it as well. Not an emotional warmth, a physical warmth. I could feel the heat of his breath on my skin, and each time he spoke, I could feel tiny dots of spit landing on my face. And then there was this awful smell. I kept moving back but he’d move even closer. I briefly considered explaining to him that he had really foul breath, but decided against it. In retrospect, I think this was probably the right decision.

“Look mate,” one of his friends came over and tried to reason with me, “you’ve got two options. Either you fuck off or he drags you outside and kicks the shit out of you”.
“No, there’s another option. You could apologise for what you said.”

This suggestion was rejected as the group leader repeated the original two options a second time.

“What about my option?” I asked.
“Fuck off” came the reply. He shoved me to the ground1. I landed on my elbow. It hurt.

He ignored me and walked off. I followed him. I never saw his ID. Maybe he wasn’t a policeman at all, he just had some sort of identification which looked police-ish. Maybe he was a traffic warden or something like that. But then that would be a bit of a weird thing to do. They could easily have realised he wasn’t a policeman and beat him up as well. So was he a policeman? And if so, surely he should have been more helpful? He disappeared down the escalator. Should I have been grateful for his intervention or resentful for his unwillingness to explain who he was?

I went to the information desk. I said I wanted to report a crime and asked where I needed to go. “You go out through Exit 2, down the escalator, turn right and then follow the signs”. This is important to remember. If you are attacked on the concourse of Waterloo station and want to report a crime, simply go out through Exit 2, go down the escalator, turn right and then follow the signs. I went out through Exit 2, went down the escalator, turned right and followed the signs. I found a door with a buzzer. It wasn’t really very clear which button I was supposed to press. Fortunately, there was a policeman standing outside. “Hi,” I said, “I want to report a crime, do you know which button I’m meant to press or who I’m supposed to talk to?”
“That would be me,” he replied and opened the door.

Now, if you are ever assaulted in or around Waterloo station, and you go out through Exit 2, down the escalator, turn right and follow the signs to the British Transport Police offices, I cannot recommend PC Rakesh Phian highly enough. He was lovely. Calm and understanding, he listened patiently to what I had to say. He was really nice. I think he even offered me a cup of tea. As I explained what happened, all the emotions I’d managed to keep contained up until that point came out. The anger, the fear, the frustration. I felt like an idiot for letting all this happen. Then I felt angry at myself for thinking that. I was the fucking victim here.

In a way, I knew it was futile reporting this incident to the police. You could even argue that given the fact I wasn’t actually hurt, reporting it is a waste of police resources. But I don’t think it is. I think it’s important. It’s crucial. It is fucking unacceptable for anyone to shout abuse at anyone in this way. I could have ignored the abuse, I could have ignored the fact I was physically assaulted. But to do so is to is to ignore prejudice in its most explicit form. We have a duty to react to this sort of stuff whenever we see it. An obligation. We need to make it clear that we are not going to fucking take this any more. We are going to answer back. Because if we don’t, we’re saying this is OK. That this is how life is.

I think that’s wrong. I won’t accept that.

——
NOTES
1 I can’t really remember what happened at this point when he pushed me. I thought he sort of just shoved me to the floor, but the next morning, I realised that one of the buttons had come off my shirt, so I guess he must have sort of grabbed me and then pushed me over.