Lewis lives in Aberdeen, which is approximately four hundred miles from London, and rather than travel down to London and back to Aberdeen in one day (a total journey of approximately eight hundred miles1), he booked into the County Hall Premier Inn:

Located in the historic County Hall building, next to some of London’s most eye-catching attractions, a perfect location for those who are here to visit London’s famous landmarks. Amongst the easily accessible attractions are The London Eye, Westminster Abbey and Big Ben.

Our London County Hall Premier Inn has everything you’d expect, incredibly comfy beds in every room and an integrated restaurant serving a mix of traditional and contemporary dishes.

I’ve never stayed in a Premier Inn before, although my understanding is that everything is premier except the price, and I’d imagine the breakfast served in the integrated restaurant is no exception to this rule. The breakfast is not actually included in the price of the room, and costs an additional £7.99, but you can eat as much as you like:

Eat as much as you like of our freshly cooked Premier breakfast. Succulent, premium pork and vegetarian sausages, eggs, cooked the way you like them, select back bacon, baked beans, mushrooms and more. And if you’d like to mix and match, you can also choose from our Continental selection too.

I know they say you can eat as much as you like, but that seems excessive. I mean, two fried eggs, two boiled eggs plus scrambled egg on toast. No-one needs to eat that much egg in one go, even if previous limits on egg consumption have been lifted . Also, given the total size of that breakfast, I’m surprised whoever assembled it has picked a relatively modest number of sausages (two) compared with the amount of cereal they’ve gone for (a bowl of corn flakes, a packet of Coco Pops, a packet of Bran Flakes, plus a bowl of porridge and a bowl of granola).

That much food would take a long time to eat, and so it is not surprising that after a while, the integrated restaurant would start to get busy as people work their way through mountains of toast and, not just pots of yoghurt, but bowls of pots of yoghurts. To try to combat this congestion, Premier Inn recommend avoiding the integrated restaurant between 8am and 9.30am: 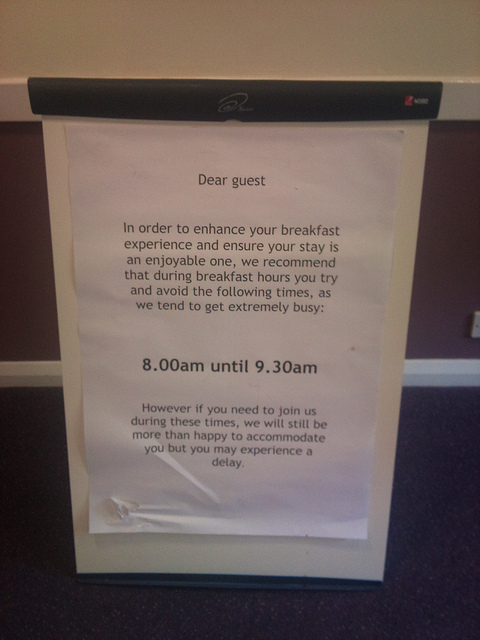 Essentially Premier Inn are asking people to avoid having breakfast during breakfast time (although the Premier Inn breakfast is served from 6.30 until 10am on weekdays and 7am until 11am on weekends). There is also a risk that so many people will obey the sign that the integrated restaurant will be full right up until 8am, then become deserted for an hour and a half, and then everyone will pile back in again. It seems a crude and potentially self-defeating attempt to manage a queue system.

Ultimately, Premier Inn have brought this problem upon themselves. The idea of an “all you can eat” breakfast is not that uncommon, but in their own marketing literature, they are encouraging people to eat much more food than they could ever realistically want or manage and in doing so have created a situation where their own integrated restaurants are unable to cope.

I would suggest that they amend their slogan to “Premier Inn – everything’s premier except the price and our understanding of basic operations research”.