It didn’t quite work out as planned and I only spent half the day at the station. Little did I know however, just how significant my timing would be. I took the 31st March off work and, though I knew that there were plans to “improve” the station, I hadn’t realised the station would change so quickly. The next day, the Sloe bar closed. Over the next few weeks, the Proteus retail units which ran along the centre of the concourse were dismantled one by one. This video captured a moment in history:

A long mezzanine floor of retail units is being built along the length of the wall facing the platforms. 1,860 square metres. 17 new “retailing opportunities”. You can’t stand in the way of progress. There’s no point living in one style and dying in another.

As part of the redevelopment, the retail units which used to surround the steps down to the Underground opposite platforms seven and eight (Cranberry, Upper Crust, Thresher, Tie Rack and TM Lewin) have also been removed. During this process, a fragment of an old poster has been revealed above the steps:

There’s something written in small red lettering along the bottom of the advert. On the left it says “Promoted by Ian Fletcher” and then on the right it says “[something] Children, Pembridge Hall, Pembridge Square, London, W2”.

Pembridge Hall is an independent school for girls:

The school is a non-selective day school for girls aged 4 to 11 situated in Notting Hill, West London. The school opened in 1979 and was originally run by a religious order of nuns. In 1983 it moved to 18 Pembridge Square. In September 2002 it was sold to the Alpha Plus Group and in 2003 expanded into number 10 Pembridge Square and became a three-form entry school. The Alpha Plus Group Board carries out the corporate governance responsibility for all of the schools and colleges in the group.

Nuns? Anyway, let’s assume we’re looking at something from the early 1980s. It sort of looks like it’s from that period, it has that kind of Preedy brown lettering, and I need to start somewhere.

I started looking on Google for photos of Waterloo from the 1980s. I found these beautiful pictures from 1987: 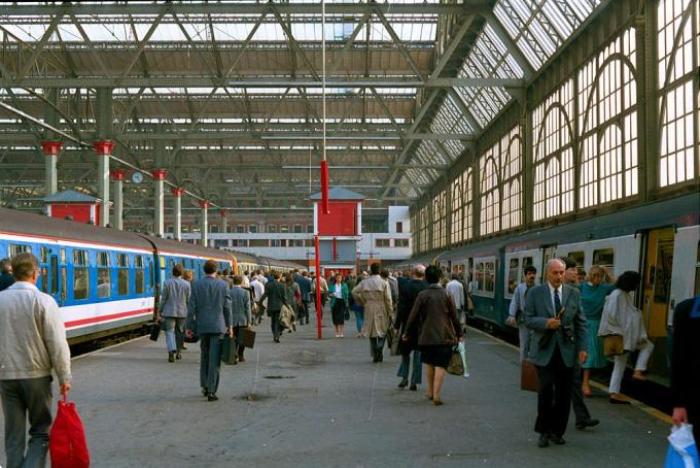 My train normally leaves from that platform.

This one is good: 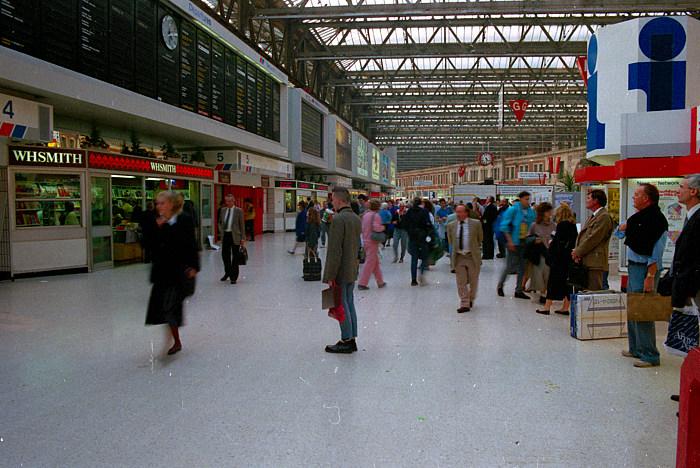 You can almost see something by platform six, but I don’t think it’s the same thing as in the torn advert.

Both those pictures come from this collection of photos which is part of a quite incredible website, Nosher.net and features a remarkable wealth of images from the last thirty years or so:

Perhaps in fifty or a hundred years’ time, people will look at these photos with the same curiosity as we do those of Victorian times: a brief glimpse of how life was, of strange people, strange fashions or strange activities that were once considered harmless (even though it currently remains legal to photograph almost everything in the UK). The photos are from various sources, from scans of varying quality through to a couple of gorgeous Pentax digital SLRs – the *ist D and the K10D. They’re simply a documentary of an average existence.

“Simply a documentary of an average existence” – that is a wonderful phrase.

I also found this brilliant set of photos: 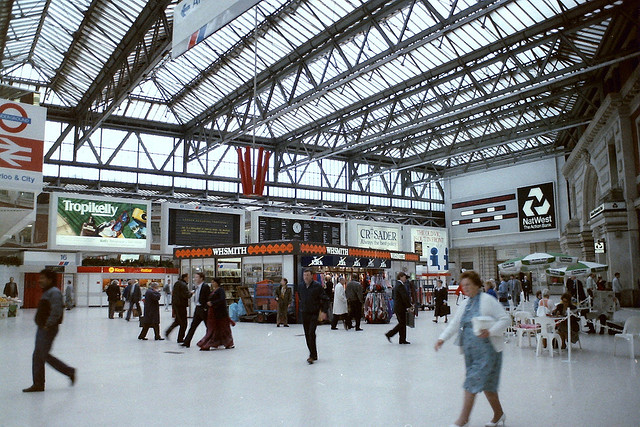 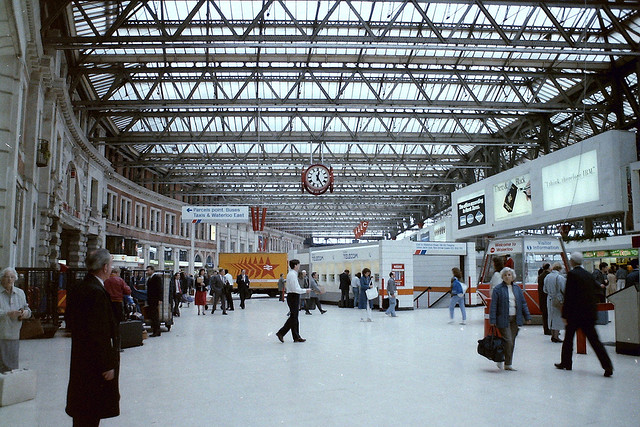 There are lots of other fantastic photo sets on Steve White2008’s Flickr stream.

These photos are beautiful, but they still haven’t help me solve the mystery. I remembered the video to West End Girls by the Pet Shop Boys. There’s a bit where Neil and Chris walk through Waterloo station. It was a long shot, but maybe that would offer some sort of clue:

Unfortunately, even though they walk right past platform six, there’s still nothing which helps me.

One day, I’ll find out what used to be opposite platform six. I won’t give up until I do.