While I was in Edinburgh, I came back to the flat one evening (it was the same night I bought the cat) and found a note on the kitchen table from Lewis: 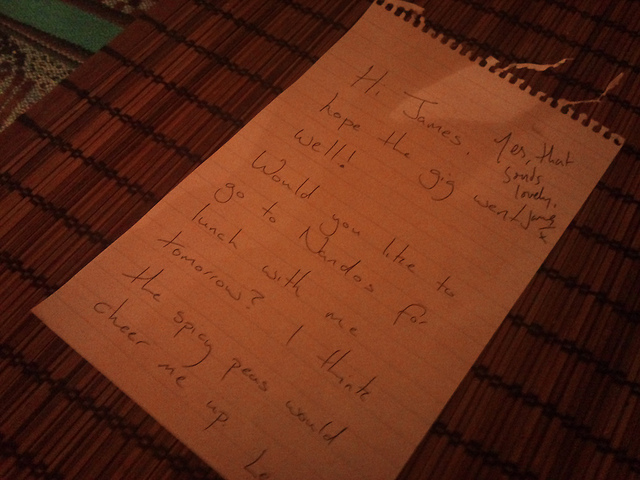 The scrawl in the top right hand corner was my response. I apologise for the state of my handwriting, but I’m sure you can understand I had been under a lot of pressure.

I think Lewis’ craving for Nando’s had possibly been inspired by watching Matthew Crosby’s show AdventureParty, which features Nando’s quite prominently. Anyway, the next day, Lewis and I met up with Peter Fletcher and we went to Nando’s. In an unusual move, I ordered the Mediterranean salad. I would normally have the Chicken Breast burger, but having spent almost a fortnight in Scotland by this point, I was in desperate need for some vegetables. It’s a cliché to talk about how Scottish food mainly consists of things being deep-fried and then sprinkled with grated cheese, but it is also true. Late one night, as I was walking back from somewhere or other, I genuinely saw someone come out of Tesco and rip open a bag of mixed leaf salad and shove handfuls of the stuff into his mouth; with the same guilty, furtive look of a man tucking into a late-night kebab. In fact, towards the end of my time in Edinburgh, I was driven by the same impulse, causing me to stand in a shop doorway eating this: 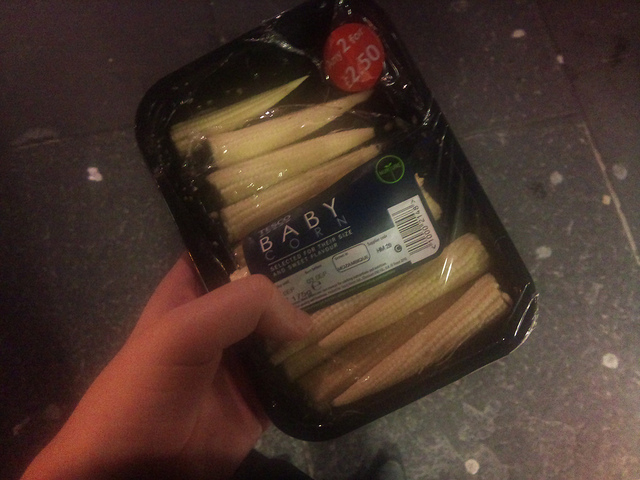 So, anyway, the point is, we went to Nando’s.

Nando’s offer a “Bottomless Soft Drink” option, where for £2.25, you are given a glass and are free to refill your glass as many times as you want from the dispenser. The dispenser system gives the adventurous Nando’s customer the opportunity to experiment by creating a “cocktail” of their own devising (Coca-Cola and Fanta, for example – a drink known as Spezi and popular in Germany and Austria).

I did not experiment in this way, fearing the results might be vile, however, a thought occurred to me. What would a cocktail of Coca-Cola and Pepsi taste like? I decided to find out.

I bought a can of Coke and a can of Pepsi: 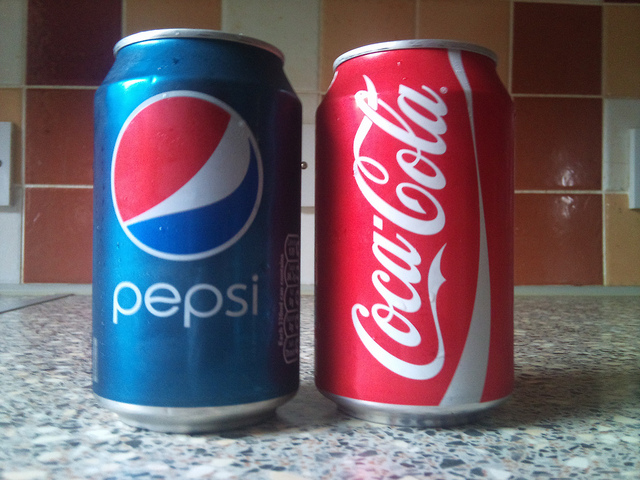 I also bought a 175ml measure to make sure the quantities of the two drinks were even: 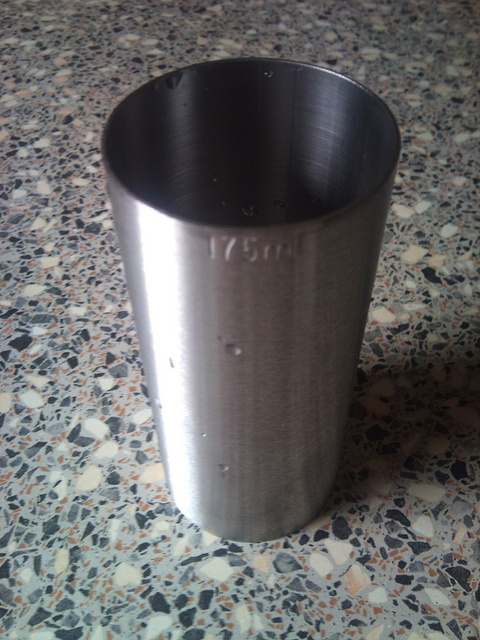 175ml is not ideal, of course. Each can being 330ml, I would have preferred a 165ml measure. Unfortunately, my local catering supplies shop did not have any 165ml measures, and so I had to make do with the 175ml measure. I had two options, I could either fill the 175ml measure with Coke, pour the Coke into a glass and then do the same with the Pepsi (creating a 350ml serving of my Coke-Pepsi cocktail, with a second 310ml serving to follow) or I could slightly under-fill the measure each time, meaning that the two servings would be more equal in size, but the Coke:Pepsi ratio might be slightly uneven.1

I went with the second option.

Here is approximately 165ml of Pepsi: 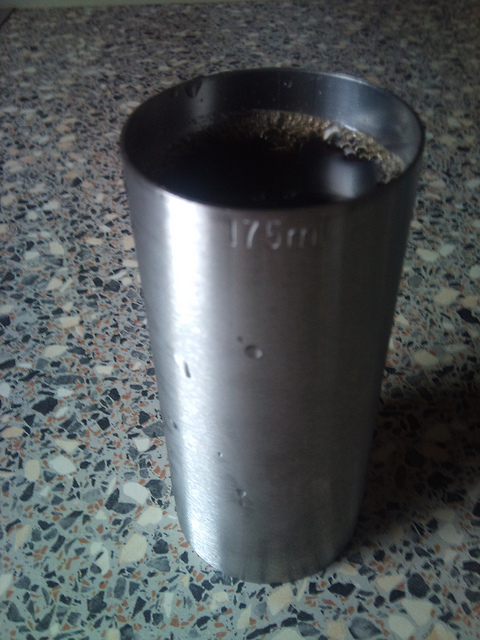 I poured this into my glass: 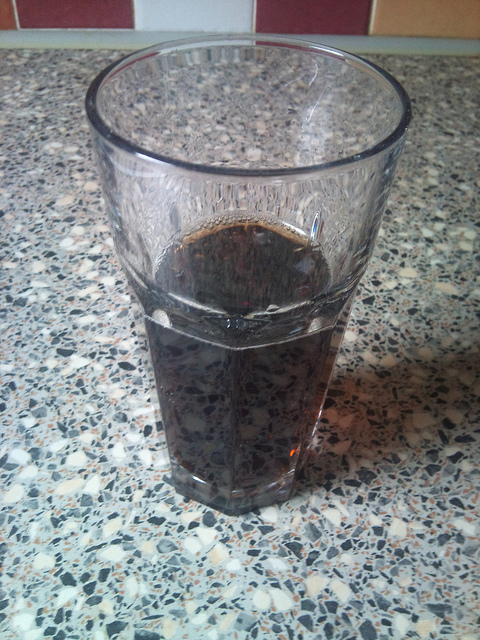 Here is approximately 165ml of Coca-Cola: 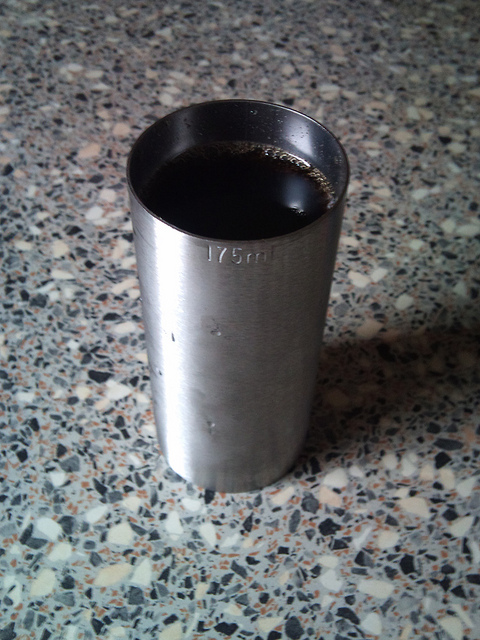 I added this to the glass and gave it a gentle stir, creating a Coke-Pepsi mix: 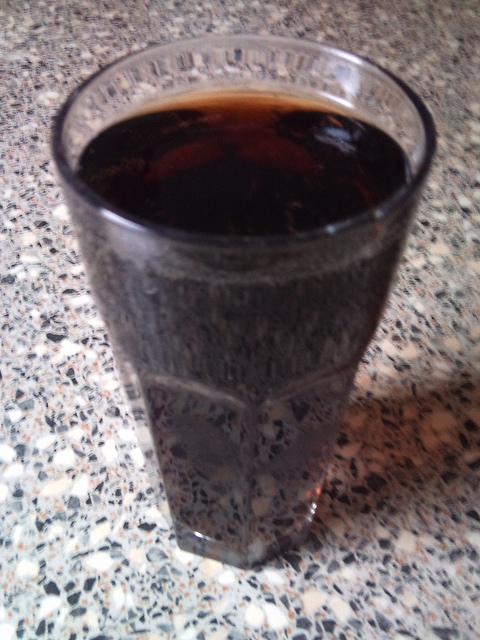 1 There is of course a third option, which would have been much more simple and would have saved me the £6.99 I spent buying the 175ml measure. I could have just poured the cans of Coke and Pepsi into a large jug and then filled my glass from that. However, this option has only just occurred to me.