This is my foot: 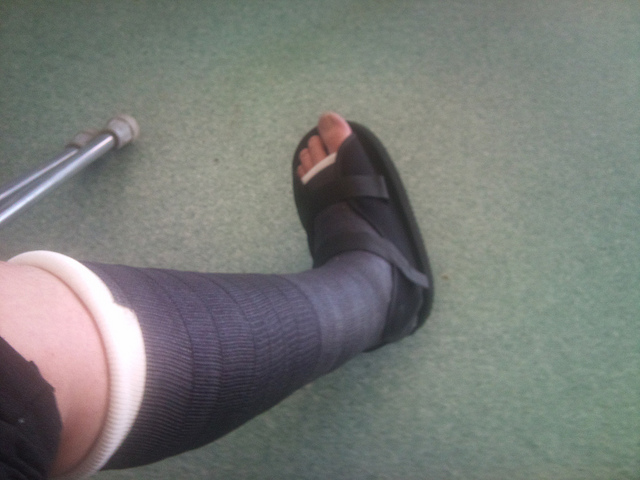 Having the whole of the bottom half of my leg in plaster might seem like a slight over-reaction to a fractured toe, but I didn’t choose this. Kingston Hospital chose this for me.

I’d mentioned before the trouble I’d had finding new shoes:

Once upon a time, I bought a pair of boots from Schuh. In fact, I wore them yesterday, or at least I wore what remains of them.

They were nice boots, but they caused me pain. They were the last pair in that size in the shop when I bought them, and the right (I want to say “right-hand” here, but obviously that is stupid) one had been the “display” model. Consequently, that shoe had been stretched and softened by the feet of countless people on my behalf (teamwork). The other shoe (the left one) had been hidden away in a box in their stockroom, lonely and resentful.

Despite the fact that I had offered this shoe freedom – a chance at a new life, away from all the other shoes, no longer trapped in a box stuffed with tissue paper – I could tell that it didn’t trust me. It crushed my foot for months. Some days I’d take painkillers to help me get through it. The worst was when I wore the boot on a plane going to Berlin. The cabin pressure caused my foot to swell slightly, and the boot refused to help in any way whatsoever. I had to take the boot off in the end, fearful that my foot might actually burst otherwise. This was a mistake. After that moment, the shoe knew it was in charge; the shoe was dominant.

For weeks, months even, I pleaded with the shoe for peace. Eventually, the shoe came to an agreement with the bones in my foot and some sort of treaty was signed. If I am honest, I would say that the bones in my foot gave way too quickly, and they should have stood their ground for longer. However, I am not sure that sort of language is helpful in the long-term and we should be grateful that some kind of peaceful settlement was reached. It was in this uncertain peace that I lived for almost a year. These were happy times. The conflict over, we walked the streets of London together. Me and my boots. Nothing could separate us. Well, maybe only some socks.

Of course, it couldn’t last. Nothing lasts forever. A small crack formed in the sole of the shoe and as it grew, the boots became increasingly unsuitable for wet weather. My own physicality didn’t help either; weak ankles meaning that the inner side of each heel would wear away within a few months and as I wore the wonkified pair of shoes for longer, the problem surely only got worse.

Out of desperation, it has been this pair of shoes which I have been wearing for the last few days.

A couple of weeks ago, I wore these boots for a whole day, from about ten in the morning until ten in the evening. The shoes had felt a bit tight, but they hadn’t caused me any problems until late that evening, when suddenly, my foot started hurting. It appears that the pressure of the shoe somehow managed to fracture my toe. I fractured my toe by wearing a pair of shoes.

I had an X-ray today. I’ve never had one before. I was able to see inside my own foot. As I had the X-ray, I was hoping they’d print the image out and then stick it on one of those lightbox things and then circle the affected area with a marker. You know, like on TV. Unfortunately, it’s all done digitally these days, and instead the doctor pointed at the fracture on his monitor. I was also hoping they’d give me a copy of the X-ray, so I could scan it and include it in this blogpost. But they didn’t. Instead, I’ve been reduced to Googling “foot x-ray” and looking for an appropriate image. I found this:

If you imagine this was my foot a couple of weeks ago:

Then this is what my foot looks like now: 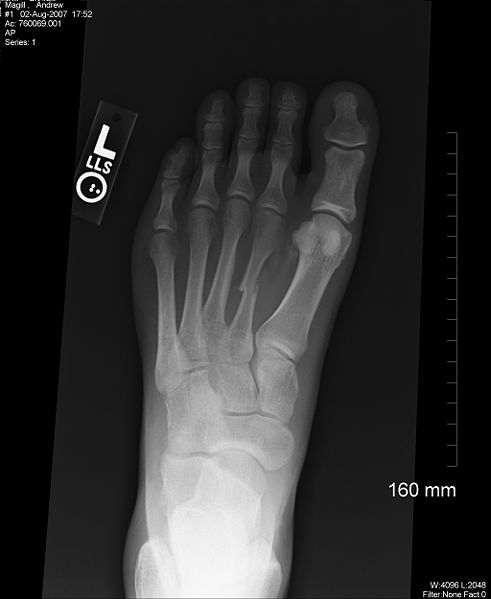 I can’t work out if this injury means I am a fragile little flower whose bones are so delicate that simply wearing shoes is too much of a strain for them, or if the fact that I’ve been walking around for two weeks with a fractured toe means I’m hard as nails and you better not mess with me or else I’ll fuck you up. I think it’s probably the first one to be honest.