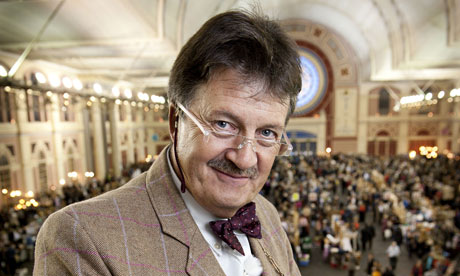 There was a brilliant episode on the other day. It wasn’t Bargain Hunt as such, it was the celebrity spin-off, Bargain Hunt: Famous Finds, and it featured television presenters Keith Chegwin and Sally James.

Bargain Hunt: Famous Finds ran for two series from 2008-2009. The guests they had on the show are brilliant:

Imagine being the celebrity booker on that show. The power! What an amazing contacts book they must have. Series 2 definitely looks better though, doesn’t it?

If you are not familiar with Bargain Hunt, it is a BBC daytime show where two teams (the “reds” and the “blues”) visit an antiques fair to buy items which are later sold at auction. Whichever team makes the biggest profit wins. Although, of course, it’s not quite as simple as that.

The rules of the game have changed a great deal during the decade in which the programme has been on our screens. Originally, the budget was £200 for each team, and there was no restriction on how many items the teams could buy. Later, teams were only allowed to buy a maximum of three items. This was then changed again so that teams had to buy exactly three items. The budget has grown to £300 per team (although in some episodes, this is doubled to £600 for reasons which are never really explained).

Each team is assigned an expert who helps them choose their items, and at the end of the “hunt”, the expert is given unspent money (or “Leftover Lolly”) to buy one further item. Originally, this item could be swapped for one of the items chosen by the team, although now teams decide in the auction room whether or not they want to add this “Bonus Buy” to their list of items.

More often than not (or so it seems) both teams manage to make a loss; their three items reaching lower prices in the auction room than were paid at the antiques fair. This is where the Bonus Buy becomes crucial. Despite the fact the Bonus Buy item was bought by an antiques expert, there is no guarantee it will make a profit (auction rooms are unpredictable places) and so the general strategy seems to be to only go with the Bonus Buy if the first three items have made a substantial loss. Even if you make a loss over all of around ten pounds, you still have a good chance to win, and it’s probably not worth taking the additional risk of choosing the Bonus Buy. However, if you’ve already made a large loss, you might as well go for it as you have little to lose.

Chegwin’s glee as the hammer came down at £140 for the toffee tin is quite distasteful. “Do you know, I watch Bargain Hunt so much and I don’t see many people making a profit but we’ve done it!” he gloats, ignoring the fact the success has nothing to do with the items he chose and everything to do with the item chosen by the expert.

There’s something wonderful about the fact that even with the incredible success of the toffee tin, the winning team was still only awarded a prize of £64 (Chegwin generously announced he would donate his winnings to charity). Normally the prize, if there is one at all, is nowhere near this much. One episode I saw had the winning team presented with £2. But you don’t go on Bargain Hunt for the money, you go on for the thrill of meeting Tim Wonnacott and the opportunity to kick your leg in the air at the end when he says “Join us next time for more bargain hunting, yes? YES!”

I like Wonnacott. He hasn’t become too wrapped up in his novelty status in the way David Dickinson did. I can’t imagine him appearing at fresher’s fairs or whatever. He seems a nice bloke. There was an episode a while ago where one of the contestants was called Lolly, and he seemed genuinely thrilled to be able to say “Hand over the Leftover Lolly, Lolly”.

If it wasn’t for the fact you have to wear a brightly coloured fleece, I’d be tempted to apply to go on Bargain Hunt. My strategy would be to buy three very, very cheap items, ideally for about five pounds each. There wouldn’t be much profit in them, but it means it would be difficult to make much of a loss. As it’s unusual for either team to break even let alone make a profit, this would give me a good chance of winning.

Basically, I’d just sit the whole thing out and hope the other team destroyed themselves by buying more expensive items which then under-performed in the auction room.

Of course, the danger with this strategy is that I’d have about £285 of Leftover Lolly for the expert to spend, and they might not go along with my plan and spend the rest of the money on the Bonus Buy, and buoyed by the success of my earlier strategy, I’d get cocky and go with this extravagant additional item which would then fail miserably and wipe out the modest profit/loss I had managed to secure.

Also, during the auction itself, I would try to remain calm. Often teams start getting excited when their items exceed the price they originally bought them for. I am no expert on the psychology of auction rooms, but I imagine that if the person selling the item is jumping up and down with joy at the back of the room as the price goes up with each additional bid, that might suggest to the bidders that they are paying over the odds for that item. Perhaps it doesn’t matter if you have a couple of people who are particularly keen on that item as they literally enter into a bidding war (only the “bidding” bit here is literal, it’s a figurative war), especially if they happen to be competitive by nature or are drunk. However, I would argue that such visual celebratory displays can only have a dampening effect on the enthusiasm of the casual bidder.

Again though, in all the excitement, I might not be able to control myself. Were this to happen, and I ended up losing, at least I would have learned a valuable lesson about hubris.