The other day, I was in a pub. I went to use the toilets and noticed a joke above one of the urinals: 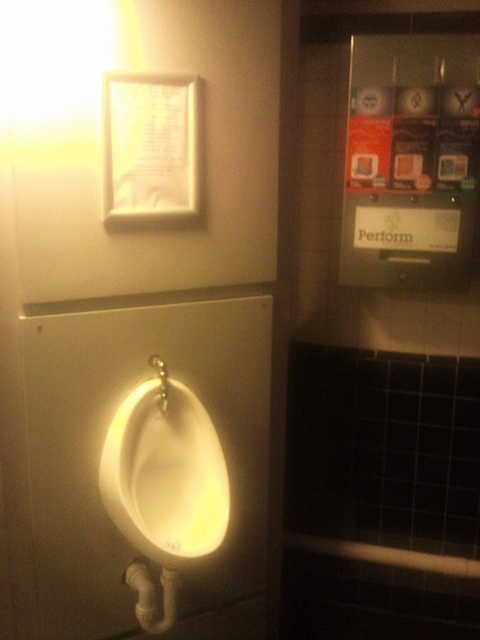 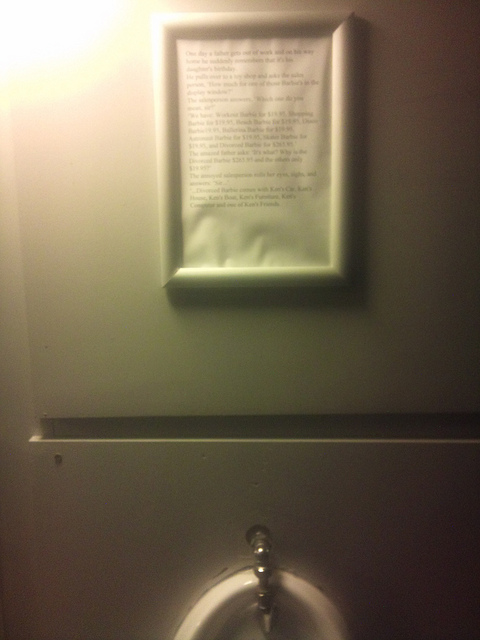 One day a father gets out of work and on his way home he suddenly remembers that it’s his daughter’s birthday.

He pulls over to a toy shop and asks the sales person “How much for one of those Barbies in the display window?”

Now, if you wanted to make a joke about the apparently unjust distribution of property in divorce settlements, then fine, go ahead. But surely Ken and Barbie are one of the worst possible choices to illustrate this point. Barbie is clearly the one who earns the majority of the money in that relationship. It was Barbie who was launched first, in 1959, with Ken coming along two years later.

In fact, according to the Ken website, Man Behind The Doll:

Ken® is only considered an “accessory” to Barbie® by Mattel… making him the ultimate “boy toy”.

In 2004, Mattel announced that Barbie and Ken were to split:

The legendary romance of Barbie® and Ken began when they met on the set of their first television commercial together in 1961. Since then, their relationship has played out much like a Hollywood fairytale. Barbie® and her beau have captured the essence of romance so perfectly with their replications of classic characters such as Scarlett and Rhett (“Gone with the Wind”) and Romeo and Juliet (“Romeo and Juliet”) to more quirky roles such as Bond and Bond Girl (“James Bond”) and Lily and Herman Munster (“The Munsters.”) More recently, the dynamic duo played Arwen and Aragorn from “Lord of the Rings: The Return of the King.” The picture-perfect pair’s talent and love for one another can also be seen in three consecutively successful No. 1 movies: “Barbie™ of Swan Lake,” “Barbie™ as Rapunzel” and “Barbie in the Nutcracker.™”

“Barbie® and Ken® have always been an extraordinary couple with so much on- and off-screen chemistry,” said the pair’s business manager, Russell Arons, Vice President Marketing, Mattel. “In fact, they just finished wrapping their fourth movie together, ‘Barbie™ as The Princess and the Pauper,’ which debuts this fall. And now they feel it’s time to spend some quality time — apart.”

There’s something slightly jarring about the way the press release celebrates the fictional relationship of Barbie and Ken but is littered with ™ and ® marks.

In 2011, Mattel expects to introduce new products, as well as continue to leverage content within its core brands. For Mattel Girls Brands, Barbie® will be promoting Ken®’s 50th anniversary with the “Ken Campaign – Will Barbie Take Him Back? Free auto loan calculator.”

Barbie was designed by Jack Ryan after Mattel co-founder Ruth Handler bought a Bild Lilli doll in Germany. The doll was named after Handler’s daughter, Barbera and Ken was named after her son, Kenneth. Given that Ken was introduced as Barbie’s boyfriend, the fact they are named after a brother and sister is slightly unsettling.

Kenneth Handler died in 1994, and according to Jerry Oppenheimer, author of Toy Monster: The Big, Bad World of Mattel:

grew up embarrassed and humiliated by having an anatomically incorrect boy doll named after him with no hint of genitalia.