During a recent trip to Poundland, I bought a pack of six Mini Bags of Cadbury Mini Animals1:

I am aware of my limitations as a writer, and would struggle to do these biscuits justice by attempting to describe them. Instead, I will direct you to the Animals product page on the Cadbury website: 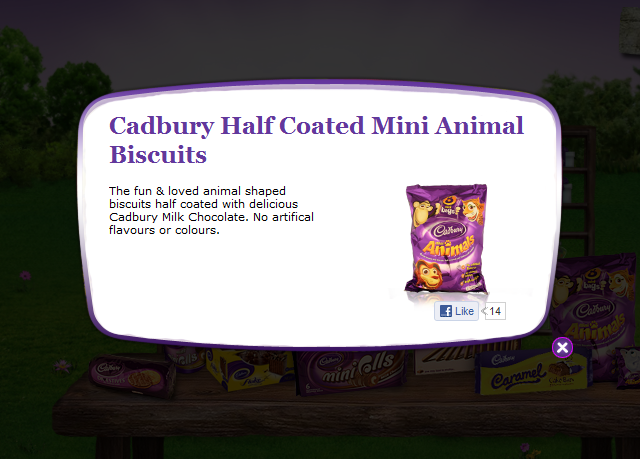 Such poetry! You can almost taste the Half Coated Mini Animal Biscuits reading that, can’t you? Delicious.

The back of the packet invites you to meet the “gang of crazy jungle animals, determined to do their best at every activity they try, always together and ready for some fun!”: 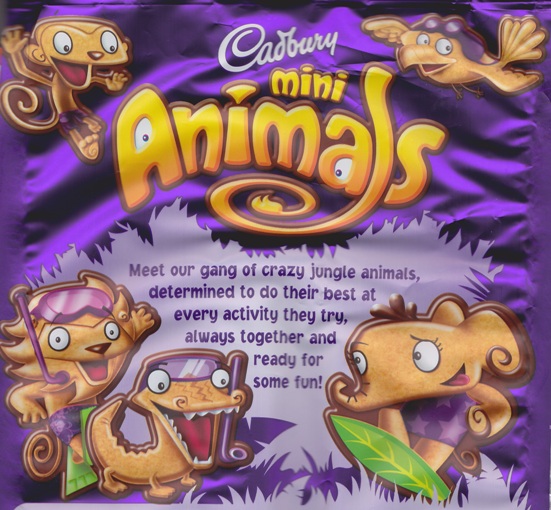 The gang consists of a lion, an elephant, a crocodile, a monkey and some sort of bird:

This cool cat is always the first to volunteer and tries his best at everything. He often gets things wrong but makes up for this with loads of confidence!

This is Leroy in biscuit form: 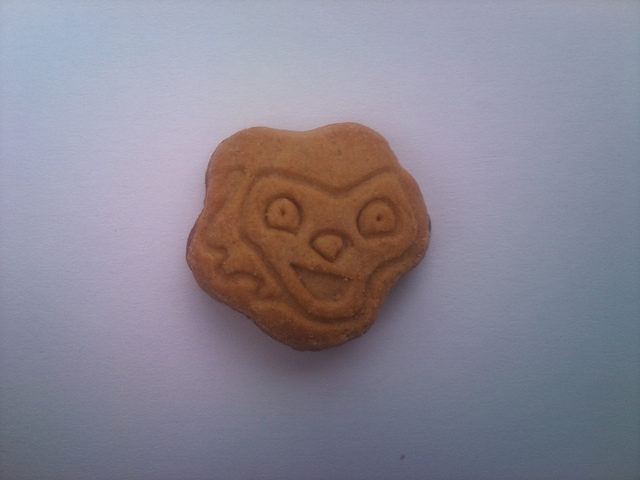 Next there is Ella Funky, the elephant:

The biggest of our gang with a heart and voice to match, she can be a bit loud, but she sings so beautifully that her friends don’t really mind.

And here is Ella Funky as a biscuit: 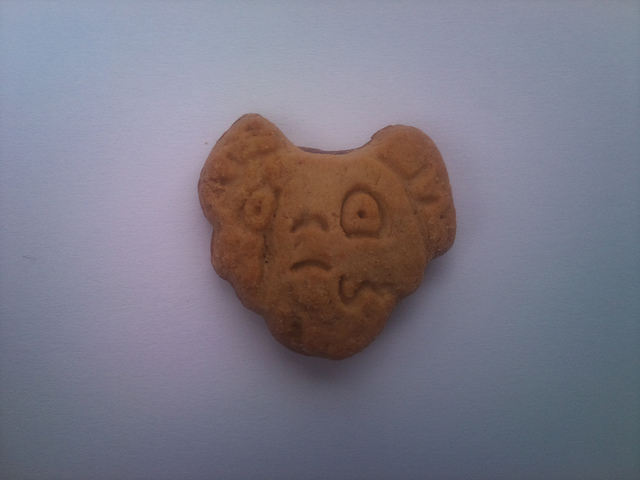 Then there is Rockodile, the crocodile:

This bright croc is a bit of a scaredy cat and needs loads of encouragement, but when things get a bit tricky he always comes up with good ideas. 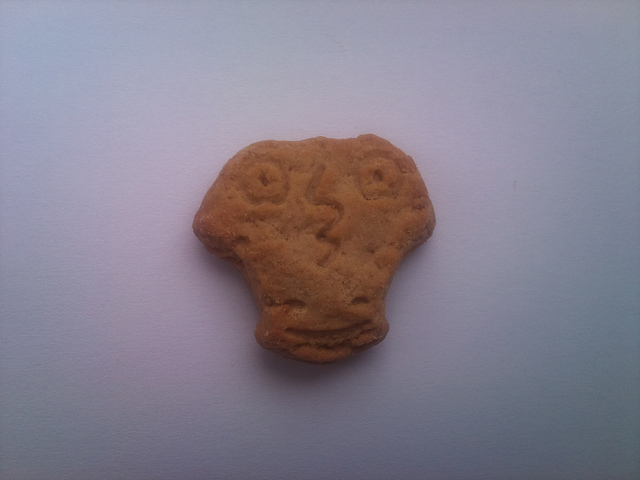 Next is Cheeko the monkey:

is a funny little prankster, always up to mischief and playing tricks on his friends. Sometimes his jokes go a bit too far but luckily his friends forgive him in the end.

This is Cheeko as a biscuit: 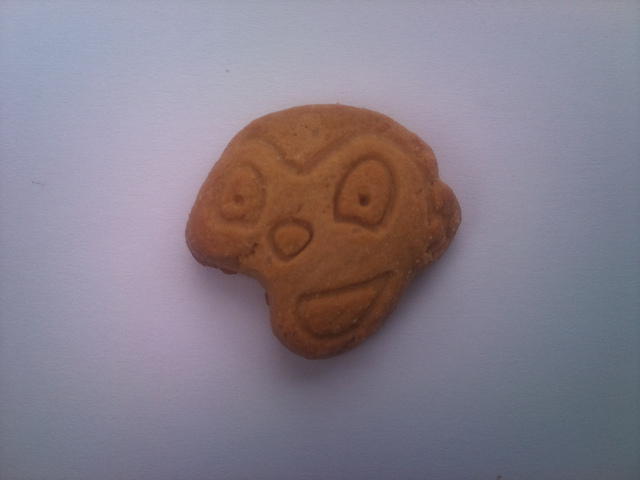 Finally, there is Swoop who is some sort of bird:

This zippy bird has the jungle record for aerial acrobatics, but zooming around so quickly means he doesn’t pay attention and ends up missing out on things.

And here is Swoop in his biscuit form: 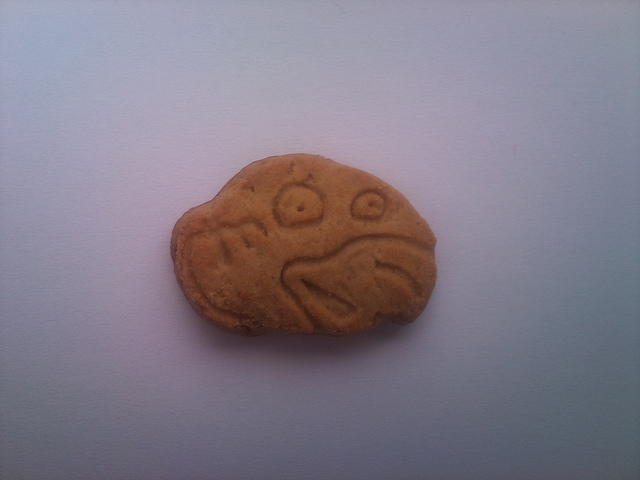 Apart from Rockodile, they all sound unbearable. Leroy sounds like the sort of unsufferable prick who would go on The Apprentice, mess up the task but then bluster his way through by saying that at least he “stepped up to the plate” and put himself forward as project manager. Fuck off Leroy. Cheeko sounds like he’s only interested in keeping himself amused and doesn’t give a shit about anyone else, and Swoop and Ella Funky both sound equally self-obsessed as well. Ella Funky just about gets away with it because she sings so well that her friends “don’t really mind”, but all of them sound like awful creatures.

Poor old Rockodile. I bet he’s not a “scaredy cat” at all, he’s just a nice bloke who constantly gets talked over by everyone else, even though he’s clearly the only one with any intelligence, and he always has to get the others out of trouble (although that wanker Leroy would probably take all the credit). Leave the jungle, Rockodile. Come and live in London. I’ll be your friend, you don’t need those guys. It’ll be great. We can go to Madame Tussauds and the London Dungeons and Ripley’s Believe It Or Not2 and Namco Funscape3 and then we can go on the London Eye, and we could go to Pizza Hut and then we could go to the pub and drink beer and it would be great. Come to London, Rockodile. Be my friend. Please be my friend.

2. From the looks of it, a few of the exhibits at Ripley’s Believe It Or Not in Piccadilly Circus seem to have been recycled from the old Guiness World Of Records attraction at the Trocadero, so, unless Rockodile really wanted to go, we could just skip that and go straight to Namco Funscape.

3. According to the Namco Funscape website, “Namco offer fun bowling at the great value price of £3 per person per game with extra discounts for parties of 3 or more. What’s more, you can play in your own shoes!” As a child, I always thought it would be cool to wear bowling shoes as regular shoes. I formulated a plan to steal some from Charrington Bowl in Tolworth by going to a charity shop and buying a cheap pair of shoes and handing one of these over to the man behind the counter when I went to collect my bowling shoes. That way, I could abandon my “deposit” (to prevent theft, you had to hand over one of your own shoes in exchange for a pair of theirs) and run away with my prize. This was before I realised you could buy bowling shoes. It never even occurred to me that you could buy them. I’m not sure where I thought Charrington Bowl got theirs from. Perhaps I thought they made them themselves. Still, the bowling shoes you can buy, from Merc or wherever, don’t seem authentic for some reason. It’s as if they’re just shoes in the style of bowling shoes rather than proper bowling shoes. I want the real thing, with a number written on the back in blue permanent marker and the legacy of a thousand amateur bowlers soaked into the soles.