Sitting on the train this morning, I looked out of the window and saw a baguette lying on the opposite platform: 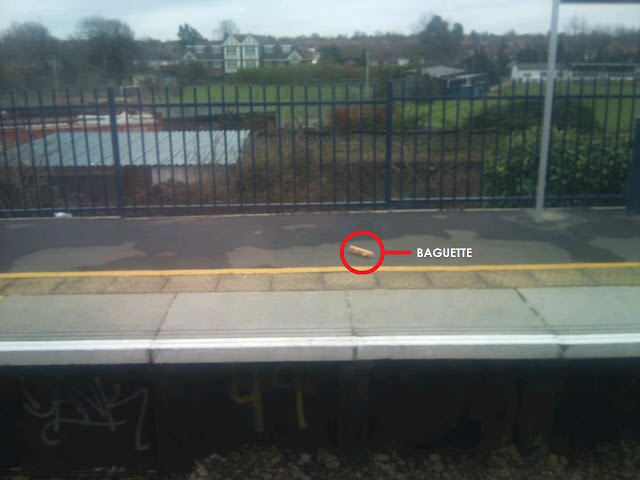 It’s not a great photo, I apologise, I had to take it quickly before the train pulled away.

I have no idea how the sandwich appeared there, I assume it was dropped by accident. I suppose there’s a possibility it was left there deliberately. A rejected baguette. Unwanted. But that seems unlikely. If you were throwing away a sandwich you didn’t want, you’d either put it in the bin, or sling it over the fence or into the bushes, or kick it onto the tracks, you wouldn’t drop it like that, right in the middle of a train platform.

Assuming it was an accident, what happened? Was it someone getting on or off the train, the baguette in their hands when it slipped? Getting on the train seems more likely. Again, if they were getting off the train, they wouldn’t leave it lying there. It suggests someone getting on the train and being separated from their lunch as the doors closed. Their forlorn face pressed up to the glass. A tear rolling down their cheek as the train left the station. A journey filled with regret. The day ruined.

Or maybe the sandwich fell out of their bag unnoticed, and some poor soul spent the morning thinking about how much they were looking forward to tucking into their baguette. Finally, at lunchtime, they opened their bag only to find it empty. Then the questions, the confusion. “I swear I put that baguette in my bag. I remember doing it, I definitely remember it. Where did it go?” A colleague walks past, eating a baguette of their own. Accusations of theft, deceit. A friendship over. Lives altered forever.

I suppose there is also the possibility, although remote, that the sandwich wasn’t actually lost. Maybe it had got to the station independently. A sandwich on its way to work. Unlikely, I admit, but it would explain where the baguettes in Upper Crust come from and why their branches are so often located in train stations.