Back in early 2009, Irish twins John and Edward Grimes appeared for the first time on X Factor. They introduced themselves with the words “I’m John”, “I’m Edward”, “And together we are ‘John and Edward'”:

Their attempt to brand themselves as “John and Edward” was short-lived, and soon they became known as Jedward. John should have negotiated harder during that meeting, as he only contributes a “J” to the Jedward portmanteau, unlike Edward who gets his full “Edward” into “Jedward” with only the “E” being downgraded to lower case. This hardly seems fair. Obviously “Johdward” looks wrong, and “Jodward” sounds silly. A better approach would have been to use their full names. Both Grimes brothers have quite long names – John’s full name is John Paul Henry Daniel Richard Grimes (or “JoPaHeDachard Grimes” as I have just decided to call him) and Edward’s full name is Edward Peter Anthony Kevin Patrick Grimes (“EdPetAntKevrick Grimes”). So they could be called “JoPaHeDaRichEdPetAntKevrick”. JoPaHeDaRichEdPetAntKevrick Grimes.

However, the world is unfair and the name Jedward stuck. Sometimes I worry that John (JoPaHeDachard) will grow to resent the success of his brother Edward (EdPetAntKevrick), just as Paul Ross must envy Johnathan and my brother envies me.

The other day, I was HMV and I saw a Jedward (JoPaHeDaRichEdPetAntKevrick) calendar. It was only a pound, so I bought it:

As you can see, it wasn’t originally a pound, it had been re-stickered: 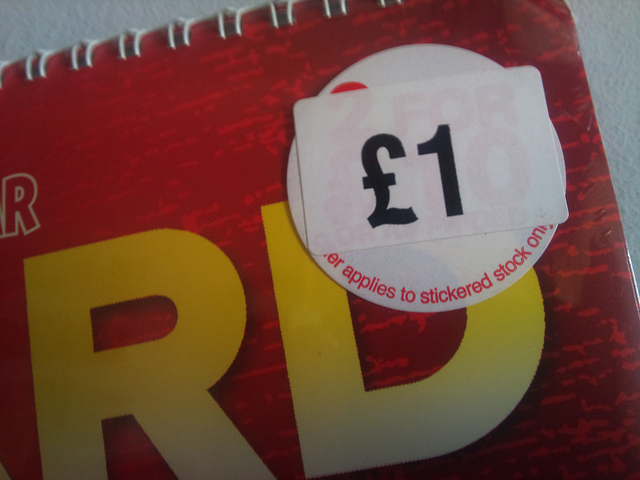 I peeled off the new price sticker: 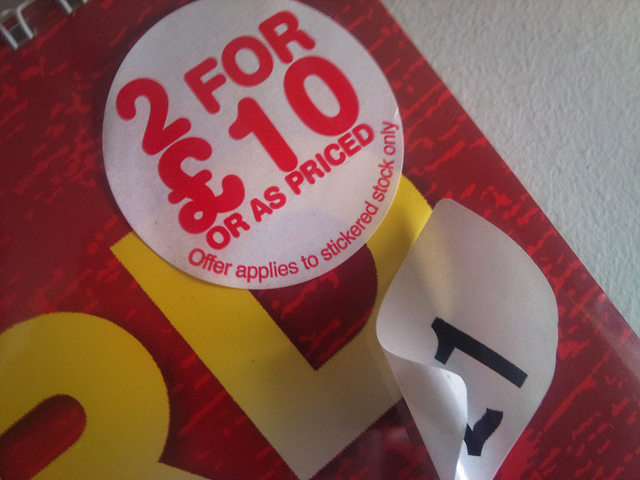 So before it was £1, it had been in an offer where when bought with another item, the two items together would cost £10. This suggests that the price of the calendar, if bought individually, must have been at least £5.01 in order for the customer to receive any benefit from buying two items together. If the calendar was £5.01 and two were purchased together, the customer would save 2p. This does not seem like a compelling offer and so we can safely assume that the individual price must have been at least £5.02. The issue is complicated further by the fact that the £5.02 price wouldn’t have been the launch price of the item. It wouldn’t have been launched in a “2 for £10” offer, it must have been reduced (and then reduced further to £1, the price I paid for it). Let’s assume then that the original price was higher than £5.02. Let’s call it £5.05.

We are now at the end of the second month (February) of 2012. A sixth of the year has passed. Therefore, the usefulness of my Jedward (JoPaHeDaRichEdPetAntKevrick) calendar has reduced by one sixth. And so, you would have expected that the price of the calendar would have also reduced by as much. The price reducing by 1/366 (2012 is a leap year) each day. In reality, it is impractical to imagine that HMV would operate such a pricing structure. £5.05 divided by 366 is about 1.4p and our currency isn’t fine-grained enough to cope with something like that. Also, it would be too complicated to change the price on their till systems and to re-sticker the product each day. It simply isn’t practical. It would be much easier to just change the price at the end of each month. That would be the sensible thing to do.

If the price was reduced in line with the reduced utility of the calendar, we would expect to see something like this as the year progressed: The calendar starts at £5.05 on New Year’s Eve, and gradually falls in price until it reaches zero at the end of the year. As I mentioned, the prices could only really be changed once a month, so the graph should really look like a set of steps rather than a straight line: 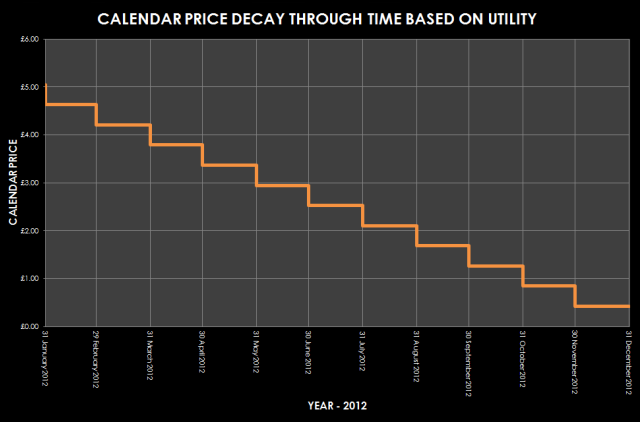 At the end of February, the calendar should have been about £4.20 rather than £1, which suggests that the pricing structure I have outlined above is not actually what happens in reality. The blue line here shows the reality of calendar pricing: 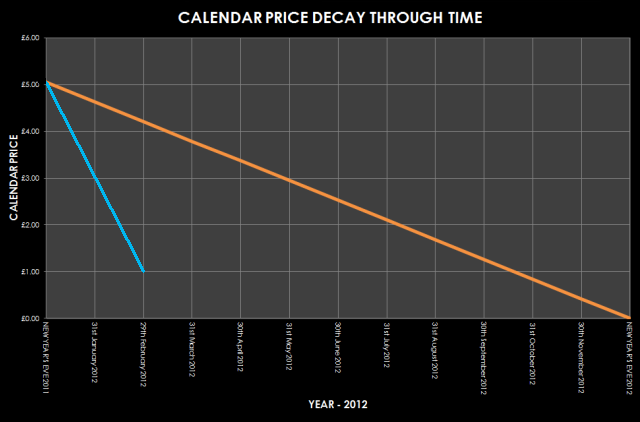 There is a much sharper drop than you would find if the price is based purely on remaining utility. Indeed, if you project the line forward, you’ll see that it very quickly falls off the bottom of the graph: 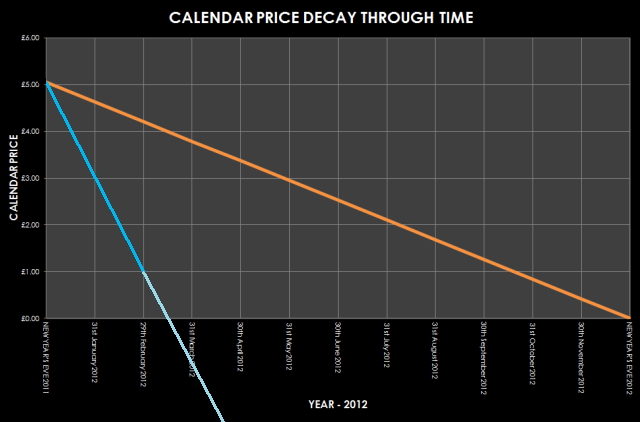 The price becomes negative in the middle of March, and by the end of the month, HMV would be giving you a quid to take them off their hands. Of course, you could wait it out, hoping for a bigger payout – just as the price decreases as each month passes, so the reward for taking one increases, but it’s likely that they’d run out of stock before then.

To be honest, I’m a bit surprised by all this. I suppose people just don’t really buy calendars after a certain point in the year, but this isn’t any old calendar, it’s a Jedward (JoPaHeDaRichEdPetAntKevrick) calendar. You’d think that would hold its value. Even if you didn’t want to use the calendar function1, you get twelve pictures of Jedward (JoPaHeDaRichEdPetAntKevrick). Surely that’s got to be worth £5.05 at any point in the year.

I’m never really sure how to tell John (JoPaHeDachard) and Edward (EdPetAntKevrick) apart, and I suspect they’re not sure either. I asked them once:

I have a question, @planetjedward. Do you ever get confused and forget which one's John and which one's Edward? #JEDWARDLETLOOSE

They didn’t answer, and I think their silence speaks volumes.

Ant & Dec famously have a rule that Ant always stands on the left and Dec on the right to avoid confusion, however I’m not sure such a rule would not work with Jedward (JoPaHeDaRichEdPetAntKevrick) as they would then require a further rule to help them remember left from right and they would find the whole thing too confusing to implement. I always thought that maybe they toss a coin to decide, or maybe whichever one wakes up first in the morning gets to pick whether he’s going to be John (JoPaHeDachard) or Edward (EdPetAntKevrick) for that day.

However, in the calendar, the page for February offers a useful diagram which helps you tell them apart: 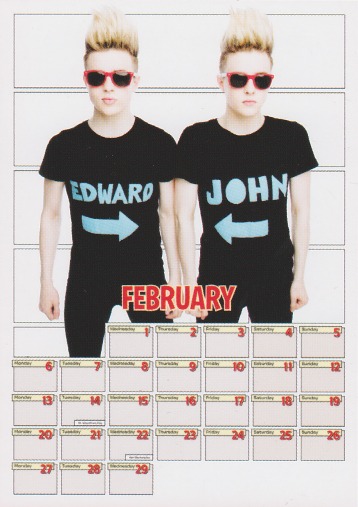 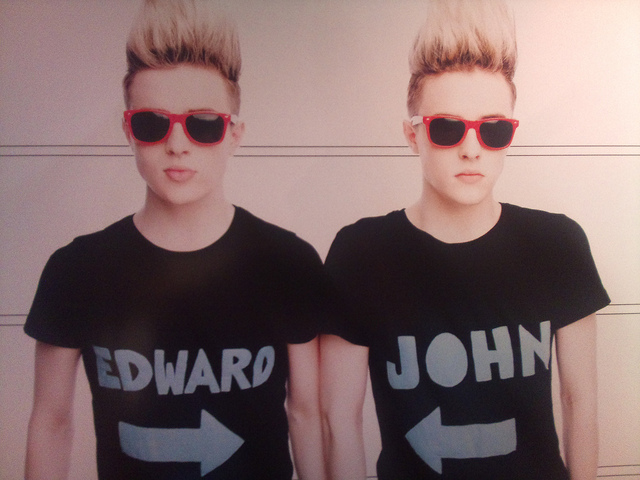 You have to admire the way he carried on, don’t you? The plaintive “I’m cool!” is an inspiration to us all. While he was recovering from his injury, there must have been times when John (JoPaHeDachard) went to the shops or wherever on his own – although, thinking about it, during that period, it would have been easier to tell them apart by the fact that one of them didn’t have a broken leg.

Using the “pouty lips = John (JoPaHeDachard)” and “thinner face = Edward (EdPetAntKevrick)” system, I was able to go through month by month and work out which was which.

In January, we have John (JoPaHeDachard) on the left and Edward (EdPetAntKevrick) on the right: 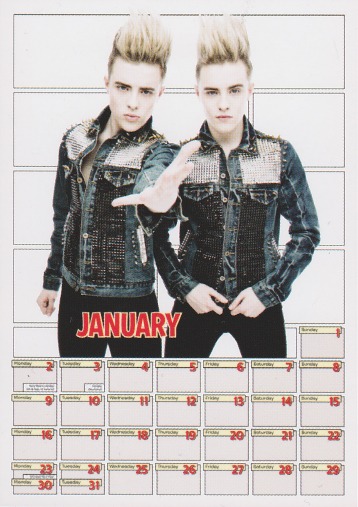 I’ve already discussed February. I’m not sure about March: 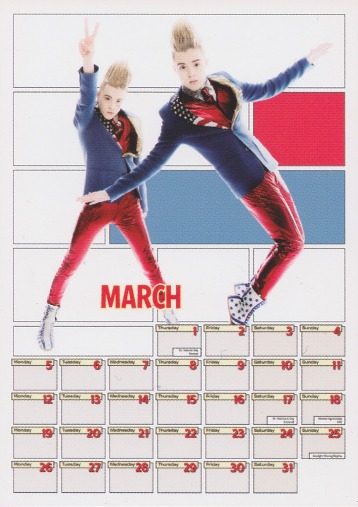 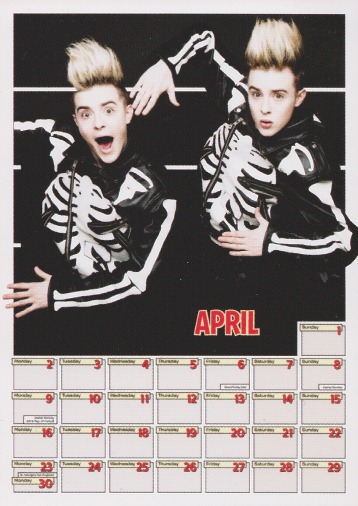 I’d say May has John (JoPaHeDachard) on the left and Edward (EdPetAntKevrick) on the right: 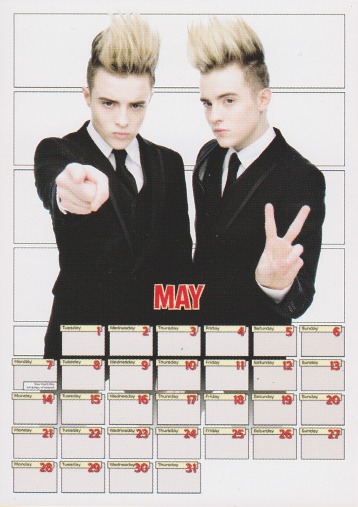 And it’s the same for June: 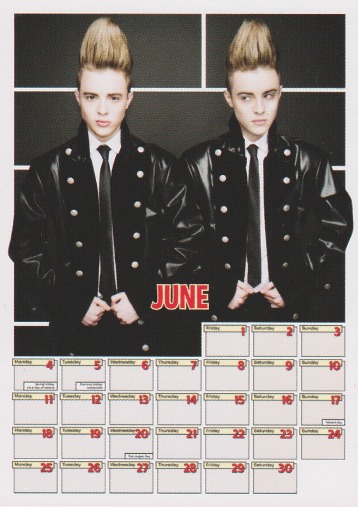 And again for July, based on the thin face of what I assume is Edward (EdPetAntKevrick) on the right: 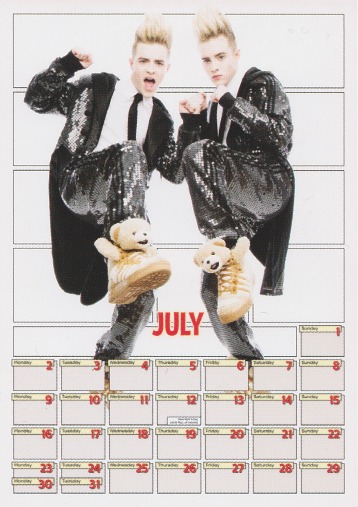 I’m beginning to think that maybe there is a left/right rule after all. August has John (JoPaHeDachard) on the left and Edward (EdPetAntKevrick) on the right too: 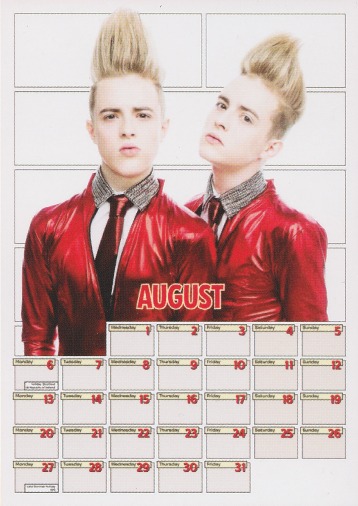 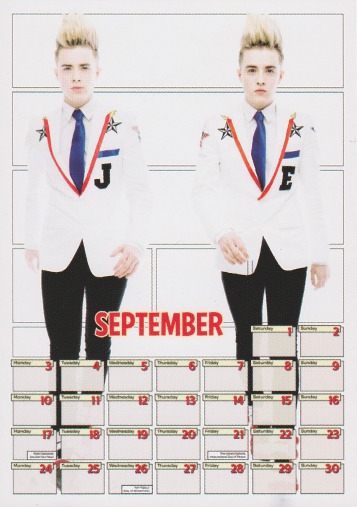 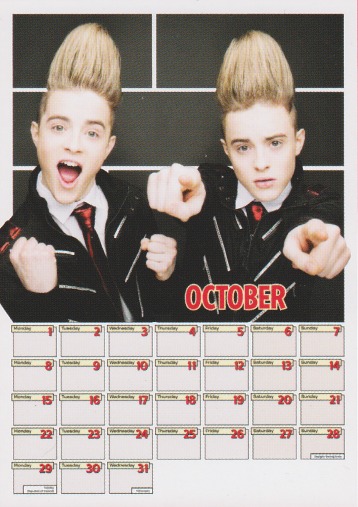 No idea for November, but we might as well stick with the left/right rule: 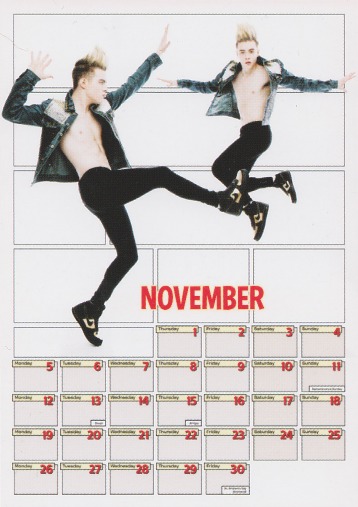 And finally, we get to December: 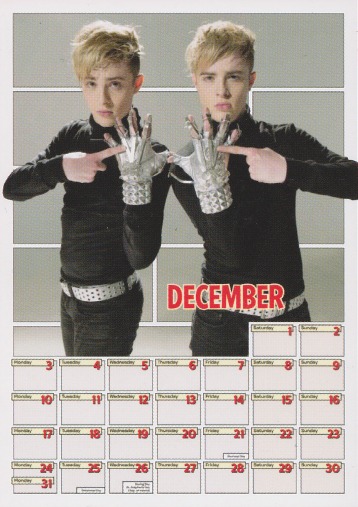 Oh, you bastards. That’s got to be John (JoPaHeDachard) on the right and Edward (EdPetAntKevrick) on the left. There is no left/right rule. You tricked me. I feel betrayed. I’m never buying a Jedward (JoPaHeDaRichEdPetAntKevrick) calendar ever again, no matter how heavily reduced it may be.

—–
NOTES
1. “While every effort is made to ensure that the information included in this calendar is correct,” states a disclaimer on the back, “Danilo Promotions Ltd cannot be held responsible for errors and omissions. The Banking and Financial Dealings Act 1971 allows the Government to alter dates at short notice.”