This weekend, the country celebrated the Queen’s Diamond Jubilee: 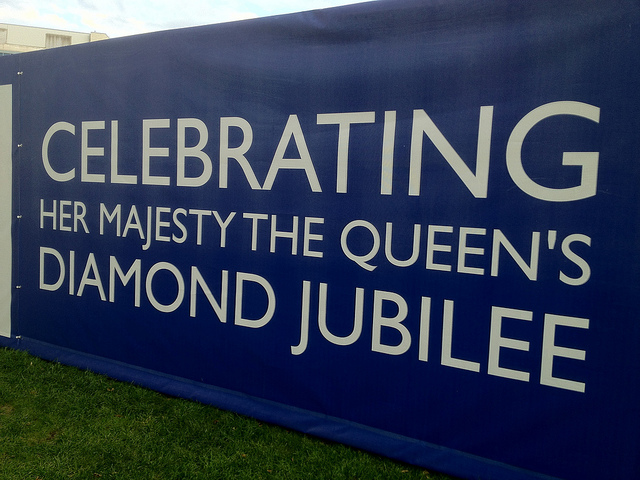 As you may have gathered from my previous post, I am not a natural monarchist. I suppose it’s something to do with the fact that celebrating hereditary power and wealth is really offensive to anyone with a conscience or a heart or a brain. I’d like to imagine that I have at least one of those, and so I struggle to accept the concept that we should all submit to being subjects of a woman because she happened to be born from the right fanny.

But despite my obviously correct republican beliefs, I do like a party. There’s nothing I love more than a good old knees-up. In fact, I like to keep my knees as high as possible at all times to maximise my fun. This is not always practical – for instance, when I am at work, the height of my knees is physically limited by the underneath of my desk. Does this affect my performance at work? Almost certainly. Are my employers willing to order a bespoke desk for me, featuring a large bulge in the middle, allowing unrestricted knee movement? No. Well, I’ve never discussed the idea with them, but I doubt they’d go for it.

The celebrations for the Jubilee looked set to be a massive spectacle, and I wanted to be part of it. Just like the Royal Wedding last year, this was an opportunity for the country to celebrate not just the Royal family, but the country itself. Part of the celebrations included a massive flotilla which would sail along the Thames. People would line the river, waving flags and cheering.

On Sunday, it was raining for most of the day, so I went to the cinema.1 Fortunately, however, the rain stopped on Monday and so I headed to the Thames to see the flotilla. 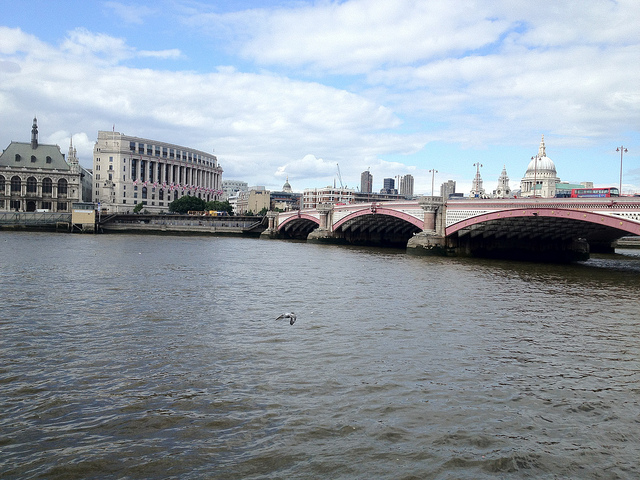 I’d expected to see huge crowds of people, but there weren’t many people around: 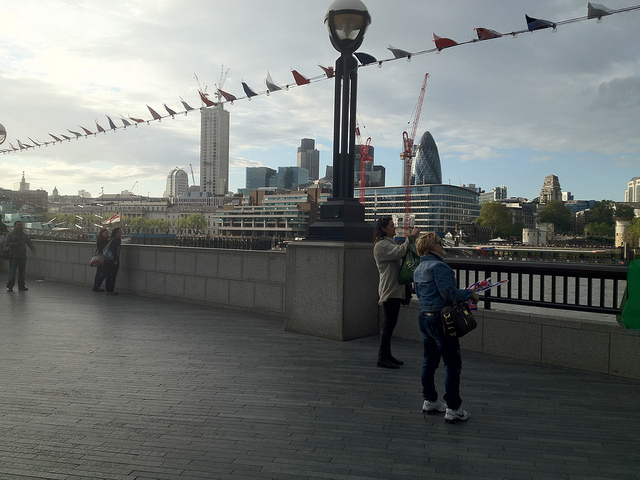 There were a few people on the Millennium Bridge, although they mainly seemed to be crossing the bridge rather than watching the flotilla, so I’m not sure they really count. 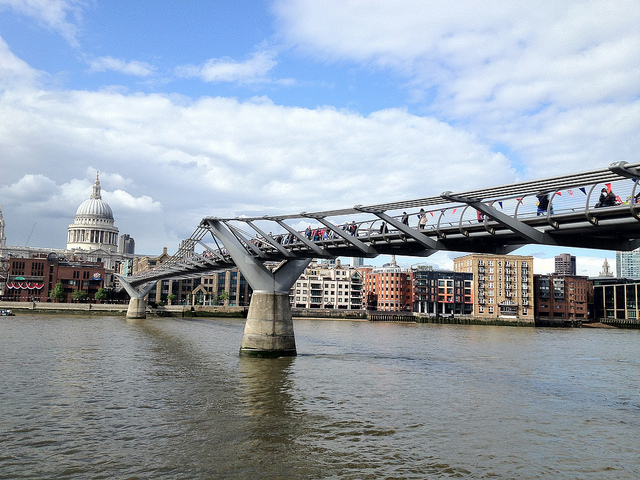 In fact, I only saw one person who looked like she’d come to catch a glimpse of the Queen: 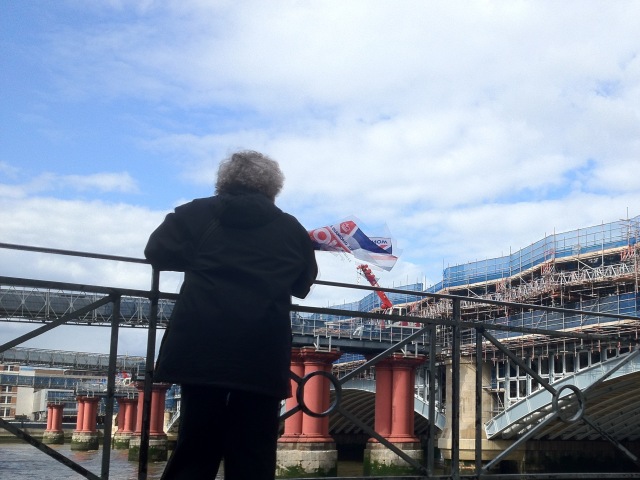 I got quite excited when I saw HMS Belfast, a relative of mine had served on that ship. It was incredible to think it was part of the flotilla. It’s such an impressive ship. And here it was, celebrating Her Majesty! 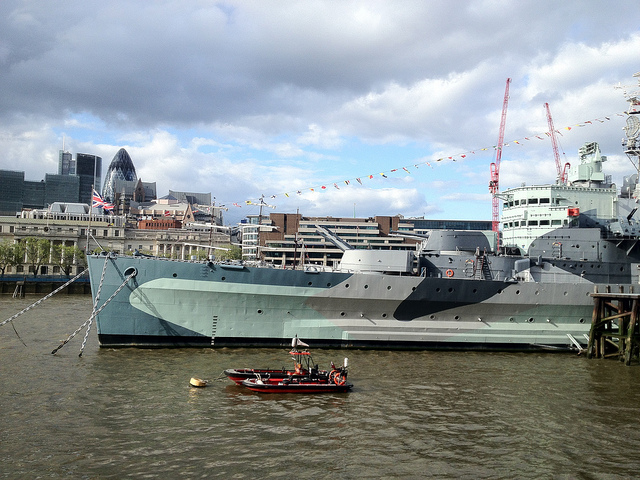 After watching the HMS Belfast for an hour or so, I realised that actually it wasn’t part of the flotilla. For one thing, it was facing the wrong direction. But probably more importantly, it wasn’t moving. I carried on.

As I approached Tower Bridge, there seemed to be a few more people around, although a few of them seemed to be going in the opposite direction: 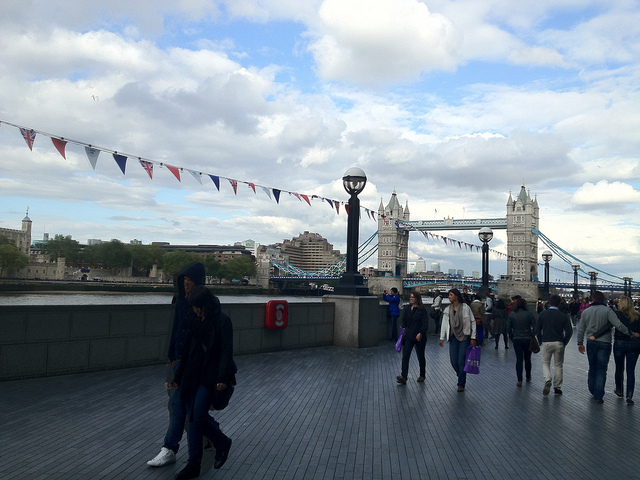 I was worried that maybe I was too late, but then, after a couple of hours, I saw it! 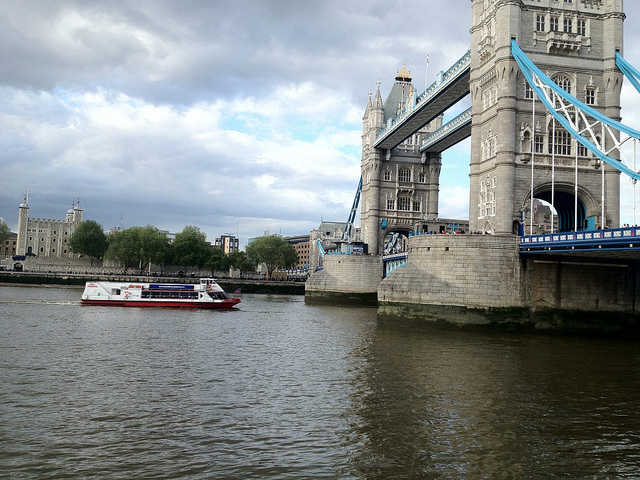 I wasn’t able to actually see the Queen, but I was still happy to have been part of it. I felt a bit disappointed though.

I was disappointed by the poor turnout – are people really so cynical these days that they aren’t even willing to spend a day by the river to cheer on the Queen? After all, she’s served this country for sixty years – yes, you could say that being in the same job for all that time suggests a lack of ambition, but it’s still an impressive achievement and one to be celebrated.

I was also disappointed by the flotilla itself. In fact, it wasn’t even really a flotilla, it was just a boat. The Queen just went on a boat trip up the river.

The whole spectacle was so underwhelming that I’ve decided I’m not even going to bother going to the Jubilee concert tonight.

NOTES
1. I went to see Iron Sky, which is about the Nazis building a base on the dark side of the moon and planning an invasion of earth. It’s amazing to think it’s based on a true story. I did enjoy Iron Sky, though it was very different to the TV series – the bloke wasn’t even in a wheelchair.