Eagle-eyed readers of this blog will no doubt have realised by now that, regardless of my wishes, my name is James Ward.

There is also a tennis player called James Ward.

What they didn’t realise is that I happen to work in Wimbledon, so I was able to take their messages of goodwill at face value. These people had intended to make a joke, but were actually wishing me well against their will. I didn’t bother to correct them. Instead, I kept their messages of accidental kindness like a sort of positivity thief. A spiritual mugger. A happiness bandit.

As a result of all the people coming to see the tennis, Wimbledon station has been a lot busier than normal for the last week or so.

After leaving work on Friday, I went to the station, but when I got there, I saw several people standing around, each holding a newspaper of some sort:

This is a massively unhelpful photo. It doesn’t really show you anything, but what I’ve found is that if you don’t include some sort of image in a blog post, then people stop reading.

I’ve highlighted the people with the newspapers using green circles below: 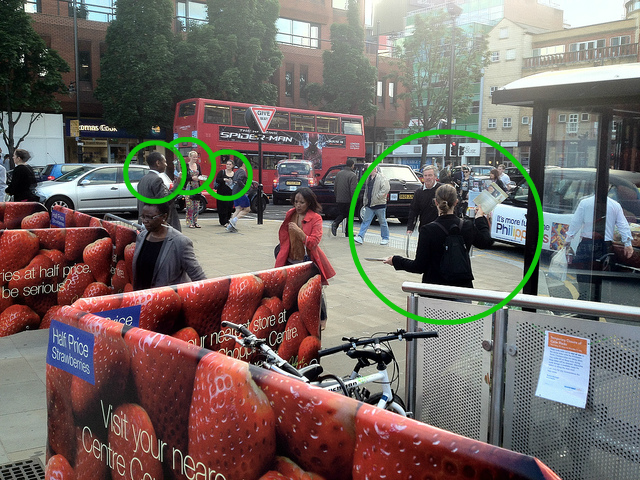 The newspapers they were holding were copies of The Watchtower, described on Wikipedia as:

an illustrated religious magazine, published semi-monthly in 195 languages by Jehovah’s Witnesses via the Watch Tower Bible and Tract Society of Pennsylvania and printed in various branch offices around the world.

I don’t really know a great deal about Jehovah’s Witnesses – although I remember that someone I used to work with wasn’t a huge fan, as his wife (who had been raised as a Jehovah’s Witness) had been shunned by her entire family when she decided it wasn’t for her. I wanted to find out more.

But there was a problem.

Even though there were several people standing around holding copies of The Watchtower, they didn’t seem to be making much effort to give them to people. In fact, they were making no effort whatsoever to give them to anyone. I stood less than five feet away from two of them for over fifteen minutes and at no point was I offered a copy of their magazine.

And it wasn’t just me. During the whole fifteen minutes, they didn’t give a single copy of their magazine to anyone. Not one fucking copy. There were half a dozen of them standing there and they did nothing. They just waved the magazines around like they were a prize on the worst ever episode of Wheel Of Fortune. Perhaps the magazines weren’t free and were for sale, but they still didn’t make any fucking effort.

The more I stood there, the angrier I got. It felt like bad customer service. It made me think of all the time I’ve spent standing in Topman or Office, holding a size 42 Chelsea boot, waiting for someone to come over and acknowledge me. It reminded me of all the time I’ve spent in Currys or PC World or Dixons, hoping someone would be kind enough to sell me a fucking printer.

According to Wikipedia, The Watchtower is “is the most widely circulated magazine in the world, with an average print run of over 42,000,000 copies per month”.

I suppose I could have gone over and asked for a copy of the Watchtower, but shouldn’t they have been the proactive ones here? They’re meant to be evangelical. I can’t be expected to knock on their door. That’s their job.