DOES THAT SOUND SMALL TO YOU?

Bruce Willis (here playing Bruce Willis) appears to have walked into this office wearing pyjamas and a dressing gown. It’s not the sort of thing you’d expect Bruce Willis to be wearing in public. Why is Bruce Willis in his pyjamas? 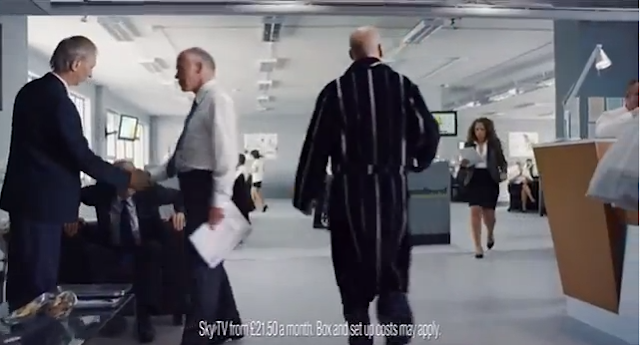 Watching the advert, I assume the implication is that Bruce Willis’ character (played by Bruce Willis) was at home using his laptop when his broadband failed and he became so enraged that he stormed out of the door to complain face-to-face without stopping to get dressed.

There are several problems with this scenario though.

Let’s assume it’s true. Bruce Willis is at home in his pyjamas, maybe in a dressing gown. He’s using his laptop. Suddenly his broadband service is interrupted. He jumps up (grabs a dressing gown if he wasn’t already wearing one) and storms out the door to confront his lousy broadband suppliers.

But how does he know where to go? I use BT Broadband. I wouldn’t know where to go if I wanted to complain. OK, so let’s say he has a bill to hand. Maybe it came in that morning’s post, or it came the day before and was stuck to the front of his fridge with a novelty magnet he picked up on a recent holiday. He grabs the bill, looks at address, then shoves it in the pocket of his dressing gown.

OK, he now knows where he needs to go, but it’s unlikely that he’d recognise the address. He goes back, grabs his phone, then looks up the postcode. Is it likely that he lives walking distance from his broadband supplier? Not really. He goes back inside for a third time, grabs his wallet and his car keys and storms out again.

By this time, I’d be thinking that maybe it would be easier to just phone up rather than go there in person. I’d probably also think that it might be a good idea to get dressed properly.

But let’s assume that Willis’ character (Bruce) has tried phoning them in the past and it’s never worked. First you have to go through the automated call centre, entering your account number and other details, then you’re put on hold for ages, and when you finally get to speak to someone, you’re told it’s not their department and they need to put you through to someone else which means being put back on hold and then having to explain the problem all over again. Also, it must be a bit annoying when you phone a call centre like that and they ask for your name and you say “Bruce Willis” and the other person laughs and says “No, really” and then you have to say “Yes, really – my name is Bruce Willis!” and then they say “What? Really? Bruce Willis? Like the actor?” and then you have to say “Well, actually, I am the actor. Bruce Willis. That’s me” and you have to go through this every single time you want to complain about your broadband or order a pizza or whatever.

Bruce Willis (played by Willis) has had enough of all that bullshit. He’s going to go there in person and he doesn’t care how impractical that might be or how cold he might get wandering through the streets in his pyjamas and dressing gown.

So, he arrives at the offices of his broadband supplier. Now what’s his plan? What does he say to the receptionist? “I want to speak to someone, I’m unhappy with my broadband service?” She recognises him. Of course she does. He’s Bruce Willis (Willis’ performance here is quite uncanny in the way he is able to so accurately capture all of Bruce Willis’ mannerisms). She lets him through. “Just take the lift” she says. “It’s OK, it very conveniently opens out into the main office floor and there aren’t any further doors you need to go through or anything.”

By this time, of course, “Bruce Willis” would already be trending on Twitter. People are posting photos of him wandering around in his dressing gown. Everyone assumes he must be on drugs.

The lift doors open and he’s in the offices of his broadband supplier (who appear to be called “Broadband”). “Who’s in charge here?” he asks. Within seconds, he’s identified the “manager”. The manager of what? The manager of “Broadband”? Surely not. I mean, just look at him. Let’s assume he’s just the Customer Services Manager. Let’s not say that he’s in a more senior role because I think the actor playing the manager is younger than me and it would be upsetting to think someone younger than me might run a company as big as “Broadband”. 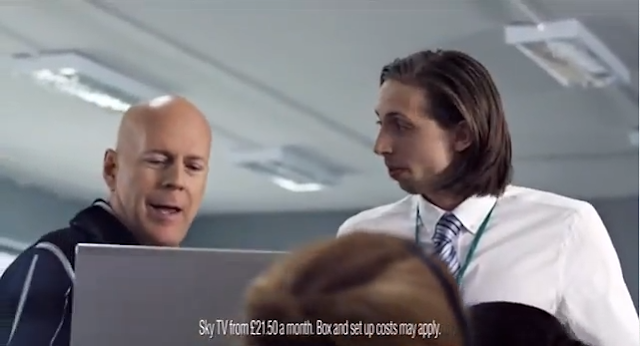 Willis shows his laptop to the manager and explains the problem. 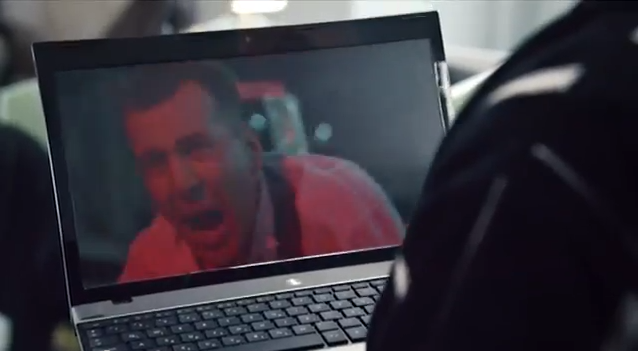 “When I’m on the internet, this keeps happening…” 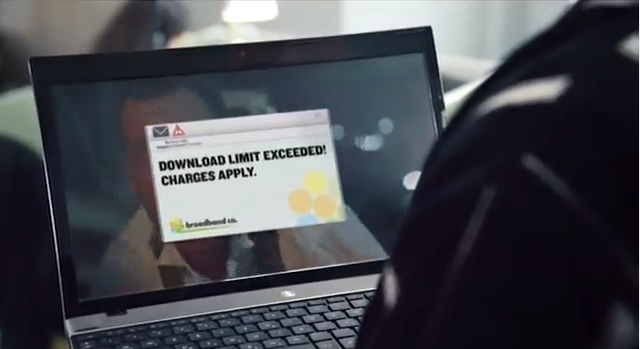 On the basis of this advert, we are to assume that Bruce Willis sits around at home, in his pyjamas, streaming his own films and watching them on his laptop. Is this how Bruce Willis wants us to think of him? A lonely man sat at home, watching past glories on a small screen? And why is he streaming these films anyway? Why doesn’t he just buy them on DVD? The Die Hard Quadrilogy is only £10.99 from Amazon (on Blu-Ray, it’s £19.99)

Even more puzzling is quite how he is able to continue streaming these videos on his laptop once he reaches the offices of “Broadband”. He left his flat, carrying his laptop under one arm, but the film he was watching carried on playing. Either the signal is extremely strong (in which case, it seems churlish for Willis to complain about the occasional outage) or Willis actually lives in the same building as the offices of “Broadband”. This would also help to explain why he is still wearing his dressing gown, but it might have been helpful to have some sort of establishing shot which would illustrate this point rather than expect us to guess that for the dramatic purposes of this advert, the actor Bruce Willis happens to live downstairs from his broadband supplier.

And if it is the case that he lives downstairs from “Broadband”, then that surely reduces the impact of his “face-to-face” confrontation – turning him from an outraged customer to a slightly ratty neighbour.

The fact that Bruce lives downstairs would at least explain why those two men shaking hands were so blasé when he walked in.

Except even that doesn’t make sense. If he’s always wandering in, then why is the ginger haired woman so clearly starstruck as he walks by: 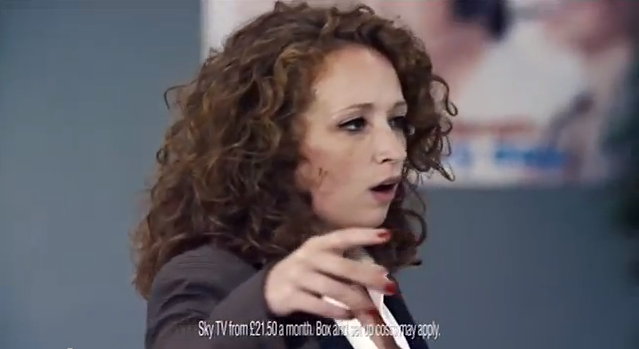 She’d be used to it if he lived downstairs and was always doing this.

As would the dark-haired woman sitting near the manager: 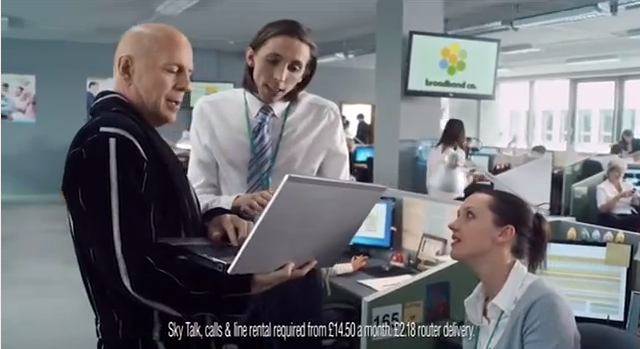 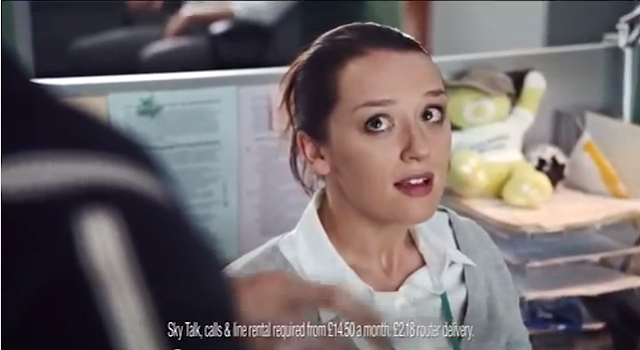 Willis explains what he expects from a broadband supplier:

I don’t want smaller, I want bigger. I want helicopters shot down by police cars. I want people on the verge of mass destruction. Saving people’s lives on a daily basis. Does that sound small to you?

Although actually, considering Willis’ most famous role as John McClane, it would be more accurate to say he saves people’s lives on little more than a near-annual basis.

Hearing this impassioned speech, the dark-haired woman bites her lip in a sexy way: 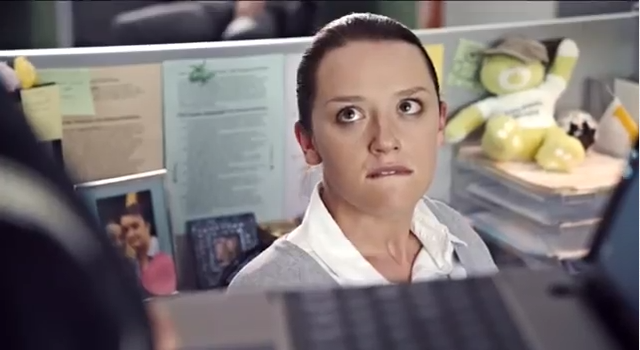 She then explains that actually, Sky’s broadband service is much better because it is “totally unlimited”, adding that she is also “totally unlimited”. I think that’s meant to be sexy in some way. Willis then winks at her and the two walk out together, presumably to fuck in the toilets.

I’m not sure what this advert is trying to say. I’ve watched it about fifty or sixty times now. I’m guessing Bruce Willis hasn’t had some sort of Charlie Sheen-style breakdown, but it’s difficult to interpret it in any other way. Either he’s wandering the streets in his dressing gown, or he’s picking up girls who work in the office upstairs. Something has gone wrong in his life.

I don’t plan to change my broadband supplier as a result of this advert.