REMEMBER WHO YOU ARE

I knew it was going to be a long day. In fact, I was dreading it.

About a year ago, while looking at something or other online, I saw that David Icke was going to be speaking at Wembley. Immediately, I bought a ticket. The tickets were quite expensive, between £40 – £60. I figured that if I was spending £40 on a ticket to see David Icke, I might as well spend £60 and get a better seat. That was a year ago. It seemed funny a year ago. 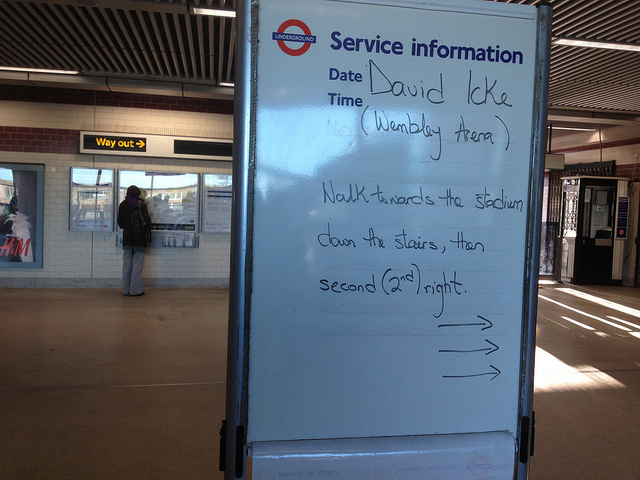 Since then, I’ve been to the “Inspired By David Icke” discussion group several times. I’ve met quite a few people who believe Icke’s theories. I’ve gone to the pub with them. It’s easy to dismiss these people as weirdos and cranks, but on the whole, the people I’ve met have been fairly normal. Nice. Likeable. I say “on the whole”, because there have been a couple of exceptions (a guest speaker at one session spoke about how our souls choose the experiences we have in our lifetime, and so with positive thinking, we can ensure that we only have positive experiences. The problem with this, of course, is that it raises the question of why people have negative experiences – did the souls of babies dying of starvation or those maimed in wars or victims of abuse choose those experiences? Of course they didn’t and it’s vile to suggest they did. But apart from that bloke, they’ve been nice). 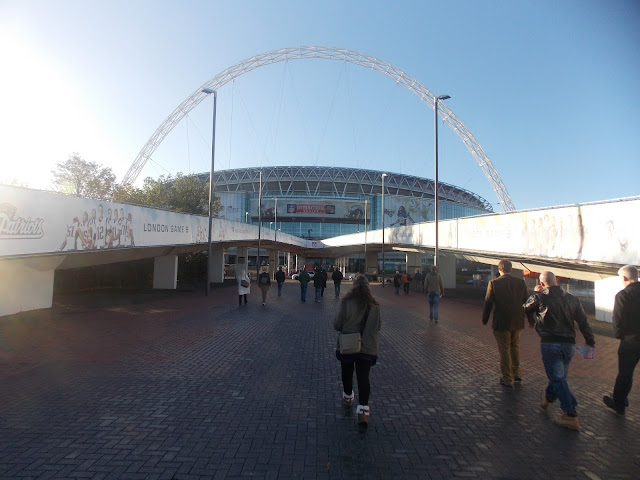 To prepare for seeing Icke at Wembley, I bought a DVD of a previous talk he had given. Human Race Get Off Your Knees: The Lion Sleeps No More was filmed at the Brixton Academy and is a four-disc set. This is why I was dreading seeing Icke at Wembley. I knew it was going to be a long day. At the end of the second disc of The Lion Sleeps No More, after speaking for several hours, Icke looks at his watch and says “Well, we’ve come a long way, haven’t we? What we’re going to do now is have a break for, say, forty-five minutes…” 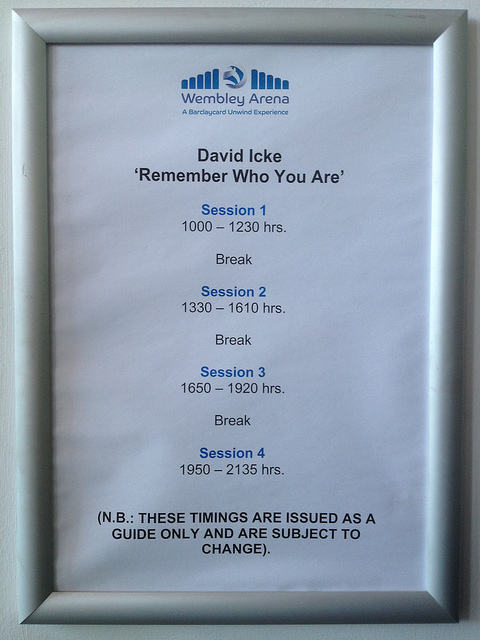 I arrived at Wembley and took my seat (seat 12, row 4, block A2) unsure of quite what to expect. There was a giant screen with a picture of David Icke. A clock counted down. Music was playing: God by John Lennon, Holding Out For A Hero by Bonnie Tyler, Don’t Look Back In Anger by Oasis, I Want To Break Free by Queen. These same songs would play during each break. Holding Out For A Hero is a brilliant song. With a few minutes left, a group of dancers came on stage and did a sort of euphoric dance.

Icke’s son, Gareth, is in a slightly awful rock band, and they did a couple of songs before each session began. I suppose he can now say that his band have played Wembley Arena, but to be honest, it seemed like nepotism to me. Bloodlines. 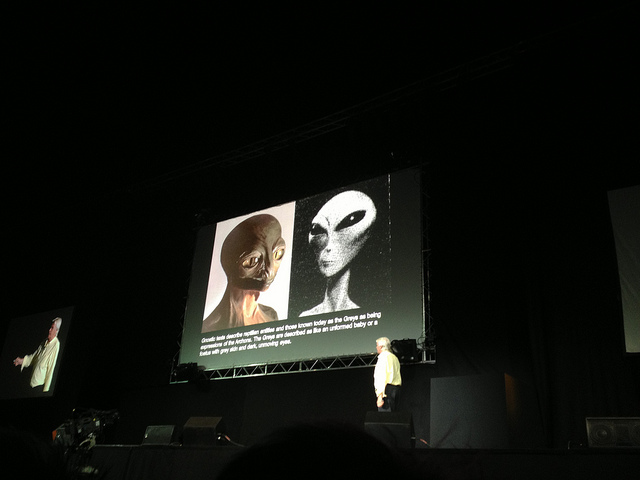 If you are not familiar with Icke’s ideas, his basic theory is that the universe is created from vibrational energy. The world as we perceive it is just a holographic projection of this vibrational energy. Humans are infinite awareness, we are consciousness, but there is a conspiracy to stop us from realising our true potential and instead to keep us locked in “five sense reality”. This conspiracy is led by entities Icke refers to as Archons, who are reptilian multi-dimensional beings beaming messages from the rings of Saturn (the messages are then amplified by the Moon, which is a hollow structure designed for this purpose). By manipulating our genetic code, the Archons have trapped us in this five-sense prison (this he refers to as “the hijack”, although in the Bible, it is referred to as the fall of man). There are also genetically modified human/reptilian hybrids who control the population through the media, politics and finance in order to preserve their bloodlines and keep us in a state of fear and negativity. These emotions create low frequency energy which they feed off. To combat them, we should give out positive energy and “choose love”. It’s quite a simple idea. 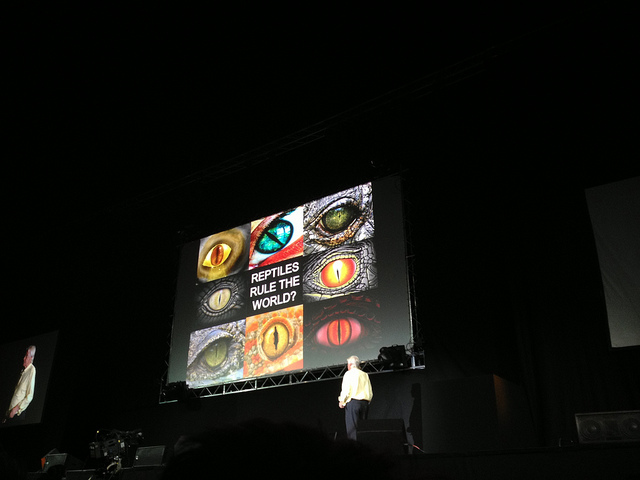 Whenever people mention Icke, they always say that he thinks “lizards control the world”. I’m not sure why people always pick up on the fact they’re “lizards”. He’s talking about multi-dimensional beings from space controlling humanity. Is the oddest thing about that idea really the fact that those multi-dimensional beings happen to resemble lizards? Although I thought he cheated slightly at one point. He was explaining how ancient cultures all over the world depict reptilian beings in their art and folklore – the Uraeus of ancient Egypt, the serpent in the Garden of Eden, the Chinese dragon. In this list, he also included the story of the Frog Prince. That doesn’t count, surely. Frogs are amphibians. You can’t claim them as “reptilian” just because they’re green. That’s like saying a cucumber is a lizard.

To be honest, much of what he said was very similar to the stuff in The Lion Sleeps No More DVD, although he didn’t mention Saturn on the DVD. Maybe the Saturn stuff is new. On The Lion Sleeps No More DVD, he seems more interested in his idea of the “Moon Matrix”. This is his idea that the Moon is an artificial structure and is hollow. He explains how he came to this conclusion:

What happened was that I was writing this latest book and I sat down one morning, and I’ve had one or two thoughts about this before but they’ve come and gone, but I sat down one morning at the computer to start writing and it was like, and I’ve had this so many times in my life in the last twenty years, it was like an energy field descends upon me and suddenly, I just knew the Moon was not what it seems to be.

That sounds pretty convincing to me.

He didn’t explain how the Saturn theory came to him, but did talk extensively about the symbols used by secret societies and religions to represent Saturn (= Satan). This list included the following:

It’s quite a long list and one which seems to include most shapes and ideas and colours and things. I was slightly disappointed that I wasn’t included in the list to be honest.

There was also a section on how these symbols are used in popular culture. Madonna and Lady Gaga both use a lot of them apparently, as do Jay-Z and Beyonce. One thing which was a bit odd was that he twice referred to imagery used by Annie Lennox during the Olympic opening ceremony and each time said “I’m not saying she’s involved in any of this” but never offered this benefit of the doubt to anyone else. I suspect Icke has a soft spot for Annie Lennox.

The third session involved Icke listing pretty much every conspiracy theory going and blaming it all on the Archontic influence: chemtrails, 9/11, 7/7, Dunblane, water fluoridation, global warming, Columbine, HAARP, Agenda 21. It’s all true, and it’s all the fault of the Archons. I’ve met a couple of 9/11 Truthers before, but I was still a bit shocked to hear thousands of people around me cheer when Icke claimed the Twin Towers were destroyed using directed-energy weapons.

Maybe it was a mistake to have paid the extra £20. I was four rows from the front, and while that meant that I could see everything perfectly (there were a couple of moments when Icke looked almost moved to tears), I didn’t really feel the scale of the event. Maybe if I’d been further back, I would have realised better just how many people were there. The previous DVD I’d watched had quite a confrontational message: human race, get off your knees. At Wembley, Icke was more positive. Although having said that, there was quite a powerful bit at the end when Icke showed pictures of people working in the arms trade or in politics and simply shouted “WHAT ARE YOU DOING? YOU HAVE CHILDREN. YOU HAVE GRAND-CHILDREN. YOU SHOULDN’T BE DOING THIS”. You don’t have to believe in Archons to agree that “What are you doing?” is a good question to ask people in authority. “I’m sorry but it fucking makes me sick” he said, before adding “And yes, I am available for children’s parties”. These few moments of what appeared to be genuine anger stood out against what was otherwise a genial and often funny presentation. He does perhaps rely too often on the use of an exaggerated West Midlands accent in order to reinforce a weak punchline, but then so does Lenny Henry, and I doubt he could sell out a gig at Wembley Arena.

Eventually, nearly twelve hours after he originally took to the stage, Icke reached his conclusion. We need to choose love, he said. Since his Brixton talk a couple of years ago, we have seen riots on the streets of London. “What you fight, you become” he explains. You cannot fight a violent state through violence. Instead of violent protest, Icke proposes a “non-comply-dance”. Dancing in the face of authority. Positivity instead of aggression. And here is Icke and his team of dancers doing their non-comply-dance:

Apologies for the poor quality of the video, but by that stage, I’d basically been drinking all day and had just spent twelve hours listening to David Icke talking about Archons. My favourite dancer is the guy in the white shirt and brown cords who is just behind the guy with long hair in the black T-shirt. Everyone else dances in a lost, euphoric way except for him. He waves his hands in the air and jumps from foot to foot in more or less the same way as David Baddiel in the video for Three Lions. I suspect he only agreed to dance on stage because he thought he might be able to kiss a girl if he did.

And then there was some chanting:

Finally, Icke finished with his message of love:

Icke even extended his message of love to the reptilian Archons and the bloodline elites who manipulate and control humanity. I thought that was nice.

Of course, you can laugh at Icke, make him a figure of fun, but ultimately, his message is a positive one. We are love. The logic behind every single step he’s taken might be completely wrong, it is completely wrong, yet somehow he’s ended up in almost the right place. And at the very least, you have to admire a man who can get thousands of people to come to Wembley Arena to watch a twelve-hour PowerPoint presentation.